Following apps can help you do just that. 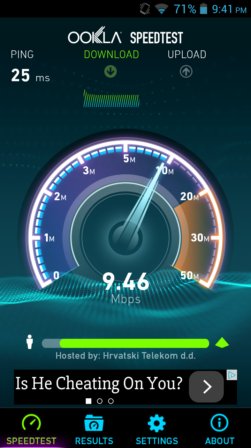 I’ll start the list with probably the most popular internet speed tester, not just on Android, but in general, the Speedtest.net app.

Speedtest.net is a website where you can test download speeds using thousands of test servers from around the world. What you see on the image above is the official Android app of Speedtest.net. Since there’s lots of test servers, chances are good that some of them will be close to you, assuring that you get best possible upload and download speeds on the test. To check speed run the app, tap on the Begin Test button and wait for the results to come up. Both upload and download is tested. 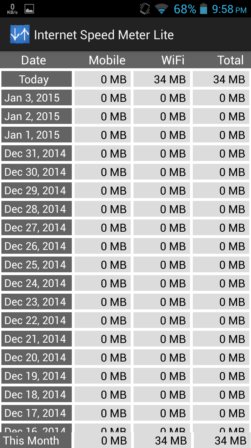 Internet Speed Meter Lite isn’t specifically a speed tester app, that’s just one of the main features of it.

Main feature of Internet Speed Meter Lite is keeping detailed daily traffic logs as you can see from the image above. But it does have a speed tracker component also. In the notification area, you will see a small notification tile, similar to the ones that audio player apps have. There you can keep track of current download speed.

Also have a look at 5 Free Benchmark Apps For Android. 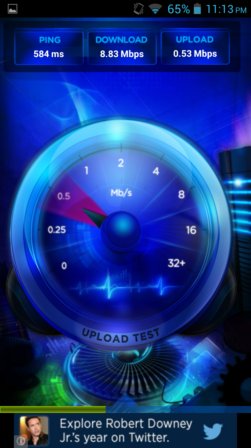 Internet Speed Test offers optimized speed tests depending on the type of connection that you’re on (3G or Wifi).

Similarly to Speedtest.net app, Internet Speed Test will first check your ping, then it will continue to actually test the download speed followed by upload speed test. Results were decent enough, I should have 10Mbit download. I get the feeling that test servers a bit sluggish. 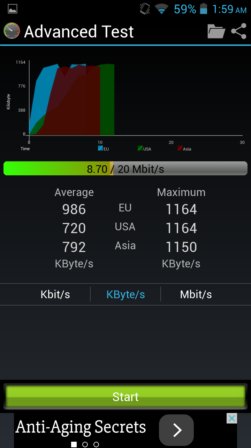 Interface doesn’t provide quite as much detail in the simple test, but you do get an advanced test (see image above). App tests ping, and download speed from North America, Europe and Asia.

Get Speed Test by BeMobile.

Also have a look at Test Internet Speed On Android with Speedtest.Net App. 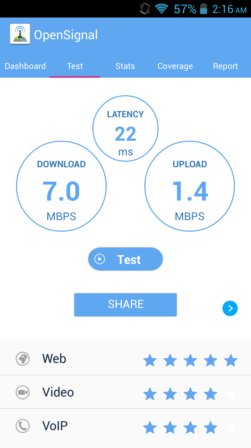 3G 4G WiFi Map & Speedtest is something very similar to a Swiss Army knife, because next to download, upload, and latency tests, it also has a signal strength scanner.

The signal strength scanner helps you find out the directions from which your data and WiFi connection signals are coming and so that you can find better signal strength.

Two apps from the list above struck my interest. First choice is of course Speedtest.net. Not only that it has lots of features, but it has best test servers which are capable of testing even the fastest of connections. Following close behind is 3G 4G WiFi Map & Speedtest because of all the useful additional features. Leave comments down below.