Humvee Shootout is a free shoot ’em up game for your PC. The plot is simple. You have been ambushed in the enemy territory, and you need to kill all  of your foes, while keeping yourself alive. You have a Humvee (Remember? the cool army version of Hummer that Tony Stark got ambushed in Iron Man)  and unlimited ammo to boot, along with 20 mines and 3 bombs (the big ones that blow stuff up).

There is no time limit for completing the mission, so you need to keep yourself alive till your fellow soldiers makes their way through. It’s a lightweight game with a download size of just about 23 MB. 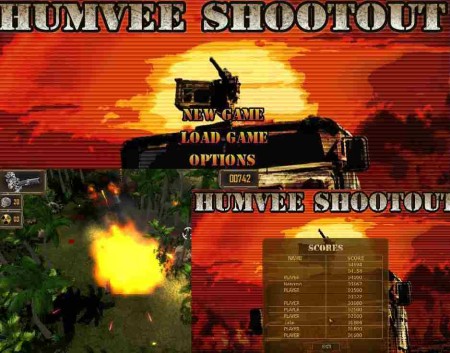 Your goal is to drive your Humvee and level your enemies with all the ammunition that you have (I swear one of the guns looks like the MAU–201; the one Arnold  used in Predator, amongst other menacing looking things). Psychedelic music of the game also helps in keeping up the tempo the entire time (feeling patriotic already?). The gameplay is really simple, just aim at the enemies (with the mouse)  while maneuvering your Humvee and start shooting (with the left mouse click). You can also detonate the land mines by  pressing Alt+1, and the bombs with the SpaceBar. You can also change the controls to your liking.

Apart from the above standard fare, you have to navigate the Humvee across the battlefield, get the mission briefcase, all the while collecting as many kinds of bullets as you can. You will have to survive the enemy’s attacks, as you lose a little health every time you get hit. The Humvee can be maneuvered with the directional arrow keys. It’s a fairly easy game to play, but it gets a bit challenging at times, especially when all of them come in together to have fun with you. 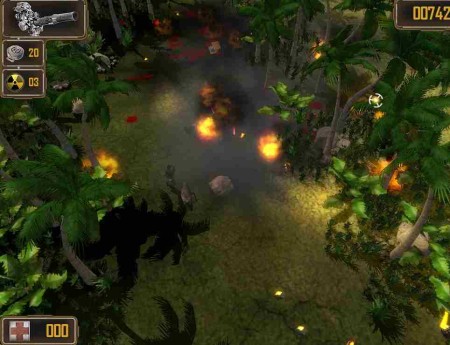 Probably the most annoying thing about the game is that like every other small sized low-resolution game, it gradually gets boring. The game manages to stay quite addictive for a while, but you begin to lose interest once you’ve played for a considerable amount of time.  However, the goal of the game is to beat your own High Score, so that might be something that helps in holding your attention for quite some time.

You can also explore this car racing and the truck driving game.

Anyways, enough of the details. Let’s start playing and shoot some bad guys.

Step 1: The installation wizard is very easy. Once it’s done, the game launches. The first window provides you with the choices like start a new game, load a previously saved game, change settings etc.

Step 2:  After you choose the ‘New game”option , your game starts. Grab the arrow keys, navigate the Humvee, point your MAU-201 (you can change the gun simply by scrolling over your mouse on the Weapon HUD at top left)  and start shooting like a madman. You will be asked to “go to the checkpoint” with an arrow guiding you. Follow the arrow to reach the Briefcase (that’s your checkpoint). You can explode a maximum of 20 landmines and 3 bombs (I wanted more, but that’s the limit) along the way. I’ll suggest saving them for times when you find yourself overwhelmed by enemies. 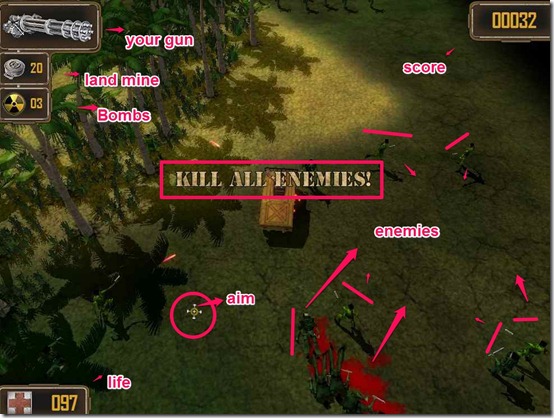 Step 3: The game goes on until you have exhausted your entire game life. This is pretty frustrating, since there are no health checkpoints to replenish your juice. Once the game ends, your score for the session are displayed. Enter your name there and boast about it to your friends (Like a boss). 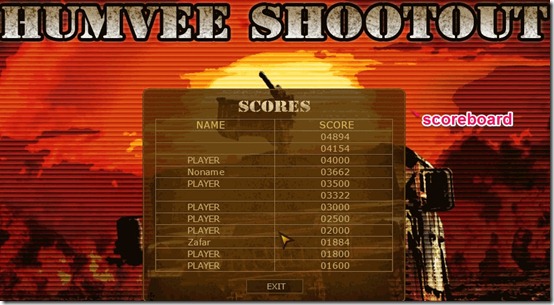 To sum it up, I would say Humvee Shootout is a “Nice” shoot ’em up game for PC. Though not much to explore, it has enough to keep you glued to the Computer. So go ahead and get playing.

Get your free Humvee Shootout here.