Exit Path is a free action game available to play online. Play single player or multiplayer mode and avoid all obstacles to find the exit path.

Exit Path is a racing style action game in which you have to escape traps, lasers, and large axes swinging in air. The game looks very simple because the character in this game is faceless being. But to reach the exit path you have to pass through many difficulties. The exit path is alternatively called way to freedom in this game. Play this cool game online on your browser.

Exit Path is an interesting and different online game. Exit path is another fabulous game sponsored by Armor games, apart from: Sequester, Culmination, and Armed With Wings 3 that are earlier reviewed.

In Exit Path there are 30 levels in single player (uniplayer) and in multiplayer you have to compete with other online players. Earn flair points and experience points while playing both single player and multiplayer. You can earn upto 60 different flair awards and customize your player character according to your choice. You can change the character’s colors: primary and secondary color. Primary color is the body color and secondary color is the knee band or hat color. You can change the headware, that is the hat style of your player; these are unlocked by earning single player flair points. The handware can be customized by earning multi player flair points. 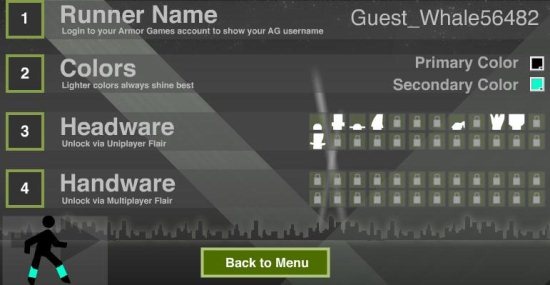 After the game loads, you can choose from uniplayer, multiplayer, flair, and modify options. Choose uniplayer and you will be directed on how to play the game; the controls will be described. The controls are: left and right arrow to move, down arrow to crouch. Use up arrow to jump and keep pressing up arrow to jump higher. Use shift or space to flow or move faster when available. the flow meter is indicated on the top of the screen.

The game starts in a bedroom and you have to reach the right end of the screen. Then after your training you will be allotted a user name with random letters. Then you will enter a survival stadium in which people will be applauding when you cross the obstacles. Then after you cross certain stages you will have to cross obstacles in an open place, then a city, and so on. 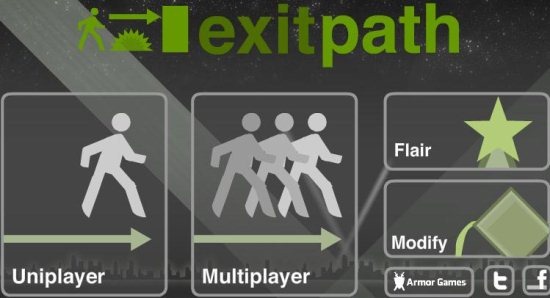 Freaking messages appear on your screen that, you can’t cross this stage or it’s a city of death or any random stuff. Don’t bother about all that stuff and just look for ways to get to the exit path. In the multiplayer mode, you will be allotted a game and you have to compete with others simultaneously. After the first one reaches the end, a countdown timer starts and depending on that your experience points will increase. The more number of games you play, the more points you get. Then you can unlock and customize your character. 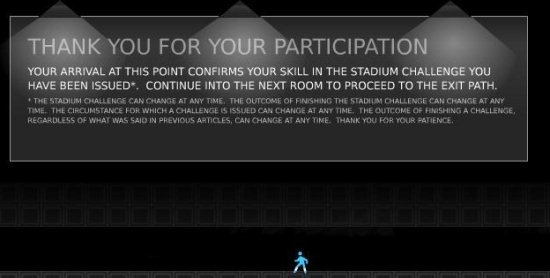 The game is absolute fun and thrilling too. Play hard to survive those traps and make your way through the exit. Click here to play Exit Path.