De Blob is a free colorful painting game available for PC download. Control Blob, the alien to paint the buildings of the city and make it colorful.

De Blob in French actually means The Blob; developed by group of students from Utrecht School of Arts. The story behind the game is that, Blob is an alien and he is from outer space, so he has to escape the police and paint certain buildings with certain color only and collect coins. Let’s see more details about this 100 MB download size game; after the screenshot of the map of the city. 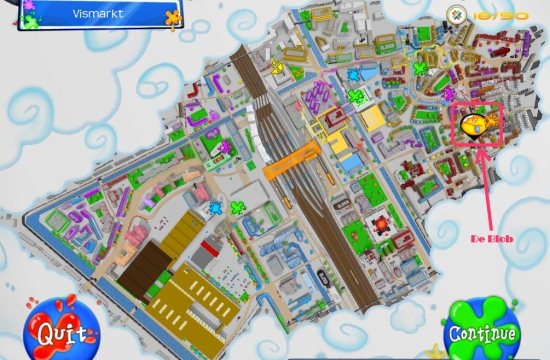 De Blob is an alien and he is dropped from space on Earth. He has to absorb the normal population who are colored and this makes him turn into that color. He also has to escape from agents who are black in color. Ultimately he has to color the buildings and the surroundings with colors other than black color. The real challenge lies, where he has to color certain buildings with color indicated on them.

Blob is a round shaped alien, so he can roll along the streets to absorb people for colors. The people escape from him except for the agents; who obstruct him completing his missions. If you are absorbed by an agent and you turn black, just avoid coloring buildings and look out for water. If you jump into water, you turn colorless and then you can absorb normal colored people to carry out your missions. Your aim is to score more points and collect 50 coins scattered around the city. You also have to color 17 buildings with specific colors indicated on them. You can see their location and color by viewing the map (as seen in the above screenshot and we have marked Blob for you). 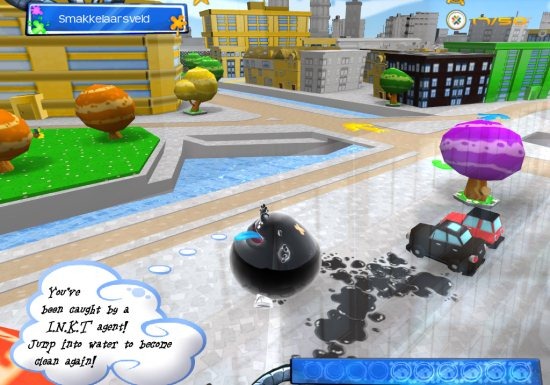 You might be under the impression that, this game sounds simple. But let me tell you some more info which makes this game difficult to play. The specific colored buildings need to be painted on certain positions only. While strolling along the streets, if for example you catch red colored guy and then a yellow colored guy, then you will turn brown (not yellow). So, the color mixing also works on you. You have to escape the agents and other colored guys to complete the mission. The limit to being caught by agents is ten times only, but watch out they are spread all around the city.

The controls are pretty simple:

You can view how many buildings you have colored and coins you have collected on the top left and number of chances left on the bottom left. For more info on gameplay, watch the video below.

De Blob is an action filled painting game. The sound effects and graphics are awesome. You can also play other painting related games like: Paintball, Tag, and Telepaint.