Tag is a free action and logic game with an apt tag line: The Power Of Paint. Use the power of colors wisely to complete the levels and have fun.

In this 3D logic game the colors give you powers. Collect colors, spray them, and most importantly use logic to make your way through the levels. Consider yourself lucky if you get bored in the middle of the game; because that will not happen until you complete the game. Download this simple 55MB logic game and start painting. 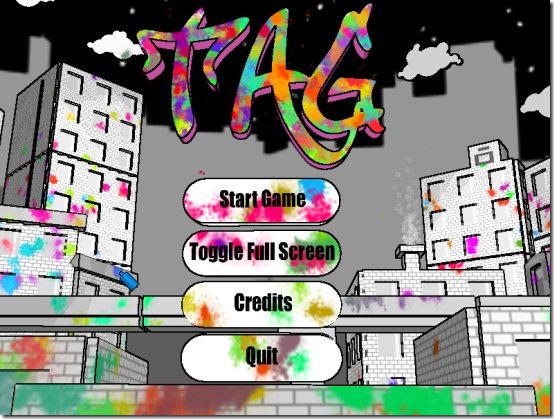 The Power Of Paint:

Tag: The Power Of Paint, game was developed by a group of students from the institute of DigiPen in the year 2008. They initially thought of developing a game to tag others by using paint. But they found that painting mechanics is more interesting than tagging. They eventually decided that power up functionality should be based on paint itself and developed this game further. Then this game won, The Best Student Game Award at independent game festival in 2008. These tag team guys were hired by the Valve Corporation as game developers and they developed Portal 2 Game using the concept of tag game.

Yes, you heard it right “Just start painting and cross those barriers”. Collect your paint gun and paint cans to change the normal rules of physics, like the Need For Madness Car Game. You are all alone in a location and only thing you have is a paint gun and walls around you. Collect those paint cans to get powers like jump, speed, and stick to move to another location. This game is similar to earlier reviewed logic game: Against The Wall. You don’t need to find doors or hidden objects; everything is out there in the open. You just have to explore and figure out how to cross the stages with all your intellectual power.

This game is a first person perspective game. The first stage is very helpful, it teaches you how to play the game and how to use the controls. Then from second stage you just need to look around and start jumping, speeding up, and sticking to walls. When you step on green color you will jump, walk on red color to speed up, and step on blue color to stick. Touch the whirlpool symbols to make a checkpoint and the big spherical mass of colors is the end point of a stage. Watch out for those wall graffiti’s, which guide you through the stage (as shown in below screenshot). 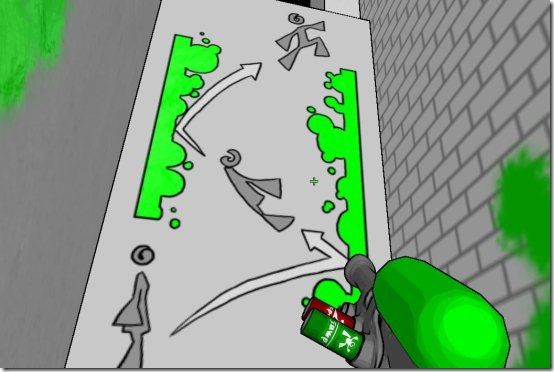 Controls of This Logic Game:

Initially you will be given advice on how to play the game and how to use the controls. The controls are: 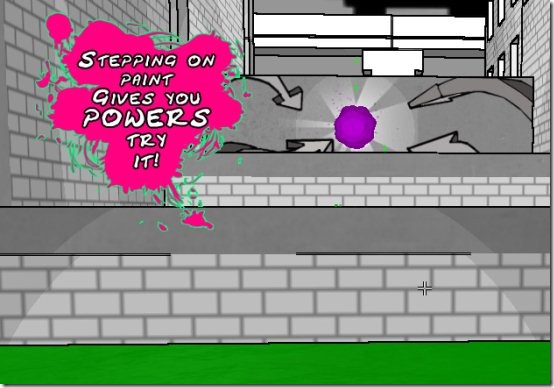 Make those black and white walls into colorful sceneries. The graphics may seem like retro gaming but trust me, they are well designed. The game also has nice techno sound effects.

Play it and find out what magic you can do with those colors. Click here to Download Tag: the Power Of Paint.