Edraw Viewer is a free file viewer using which you can effortlessly view EDraw and Visio file formats. Microsoft Visio and Edraw Max are two very similar programs which you can use in order to create diagrams, flowcharts, mind maps, and pretty much anything else that’s related to these type of drawings. This is just a viewer, not editor, if you also want to edit, you’re gonna have to upgrade. 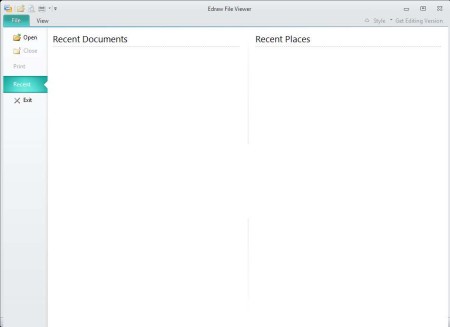 Interface of this free Edraw and Visio viewer can be seen in the screenshot above. It follows the same type of design that you get in Microsoft Office. All the way in the top left corner you can see a menu and underneath there are two tabs. First one is for managing files, opening new diagrams, flowcharts, and so on, and the second one if for the actual viewer.

Key Features of Edraw Viewer are:

Microsoft Visio and Edraw Max are commercial diagram making programs. To view drawings created in them you would normally need to have them installed on your computer, but now with Edraw Viewer, you can view them for free. Keep in mind that this is just a viewer, for you to be able to create and edit diagrams, flow charts, and everything else that these tools offer, you’re gonna have to upgrade. Here are a few pointers to help you get started.

How to View Microsoft Visio and EDraw Files with EDraw Viewer?

This isn’t particularly difficult application to use, it’s just a viewer after all. To open up a file you’re gonna have to click on the Open button from the main window, which can be seen in the image above. 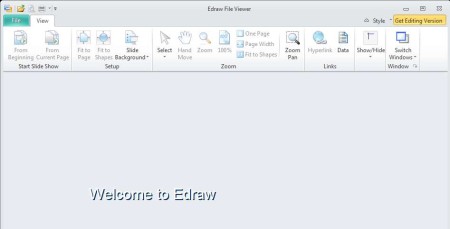 Once you do that you’re gonna be switched over to the View tab. Additional toolbar will be shown at the top where you can zoom in, move, select items in the diagrams/flowcharts that you open up and so on.

You can also turn on additional sidebar on the right where data about the files that you’re viewing is gonna be shown. You can do this by clicking on the Data button from the toolbar.

People who are only interested in viewing Visio and Edraw documents that their colleagues have sent them on their home computer, for example, can use this free viewer, instead of having to purchase additional licenses. Edraw Viewer is very easy to use and it offers a very modern interface. A lot of tools are available for you to study the diagrams, flowcharts, and drawings that you open up inside this free Vision and Edraw viewer. Most important thing is that it’s free, so if you give it a try and you don’t like it, you don’t lose any money.

You may also try Diagram Designer, SlickPlan, LucidChart, and Creately reviewed by us.