Greenify is a free Android battery saver app that hugely improves the battery life of any Android device. It lets you hibernate the apps that traditionally use a lot of battery. For example, Facebook is an app that is commonly installed on most of the Android phones, but it constantly drains the battery. If you have Greenify installed on your device, then you can choose to hibernate Facebook so that it does not keep running in the background. Instead, whenever you launch it, it will wake-up, and will function normally until hibernated again.

I know that there are tons of apps in the Google Play Store that claim to save battery, and we have reviewed a few of them here as well. But most of them just play with WiFi / Data Settings / Screen-On time, etc. They do nothing to address the issue of apps that consistently run in the background and keep consuming battery and Internet data, and affect performance as well.

That is where Greenify shines above the rest. 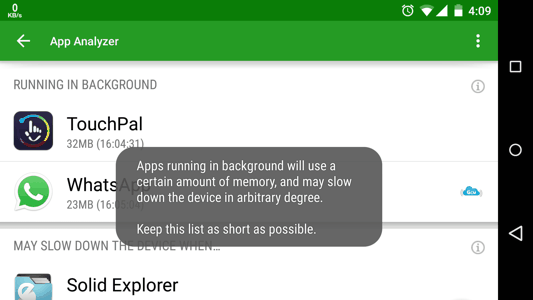 Android as an Operating system has never been known for having great battery life. The ultra-high resolution screens and monstrous processors underneath have had obvious implications on the battery. But seriously, none of us can lay the blame for poor battery life solely on device manufacturers. There are numerous Android app developers out there who are responsible for releasing apps which are huge battery hogs. And for this reason, I am talking about Greenify today which can help you optimize your Android device and save battery as well.

Okay, as has already been stated, there is no shortage of apps in the Play Store which claim to be battery savers, but rarely ever have a real-world effect on our devices. Even when they do, the improvement is negligible.

Greenify stands-out because it has a different approach, which theoretically shouldn’t only increase battery life, but have a positive impact on performance as well. And yes, I did find the claims to be truer than expected in my practical usage scenarios.

Now that, is the real question here. While most battery saver apps know only one thing that can be done — force stop all running apps and clean the RAM. Some others also direct you to clear the cache or to charge your device in a particular manner. What these apps don’t tell you is the fact that Android OS always restarts all apps which are force-stopped abruptly, ending up consuming even more battery juice! And cache? Well let’s just say, that leftover cache may cause problems over a long period of time in some cases (notice the ‘some’ here). But in normal usage scenarios, cache is used only to speed up various loading tasks. Also, the new-age Lithium Ion batteries do not require you to Charge or discharge them in a particular manner and are manufactured to compensate for the users’ charging pattern.

Surprised? You should be. Most developers conceal these facts about how Android OS works in terms of memory management just to get you to install their app. The net gain is only psychological, because you ‘believe’ that you are using a battery saver and enjoying a much better battery life.

[Having said that, some of the aspects of these app indeed save battery; like, turning off wifi when not required and turning off screen so that it is awake for a smaller period, etc.]

How is Greenify Different from Other Battery Savers?

The answer is simple: this app seems to know how the Android OS ticks. It doesn’t concentrate on stopping the apps, instead focusing more on preventing Android OS from restarting them again once stopped. If you have a Rooted device or Xposed installed, you might have been using Greenify already because it has always been among the top apps to install after getting Root. But the developer finally added support for non-rooted devices as well. So, you can use Greenify to ‘hibernate’ any apps that you don’t need to be running in the background. And it obviously means that messaging, email, alarm and similar apps of high significance or which require background sync, are a strict NO!

And one more thing, DO NOT expect Greenify to dramatically improve your battery life suddenly. That totally depends on the size of the battery in your mobile device and your usage pattern, my friend. But yes, your device won’t drain its battery due to some irrelevant apps running in the background unnecessarily, which happens more often than you’d think.

How to Save Battery Using Greenify?

The UI of this battery saver app is as simple as can be. There are no frills or irrelevant options whatsoever. 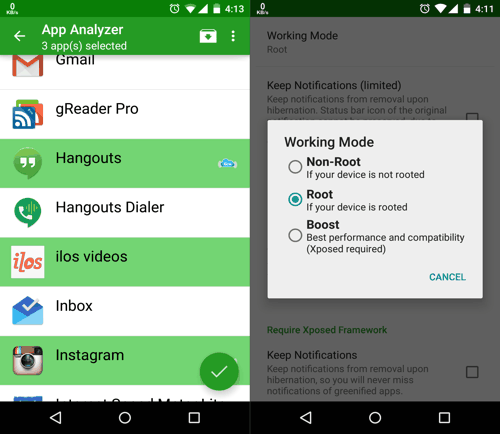 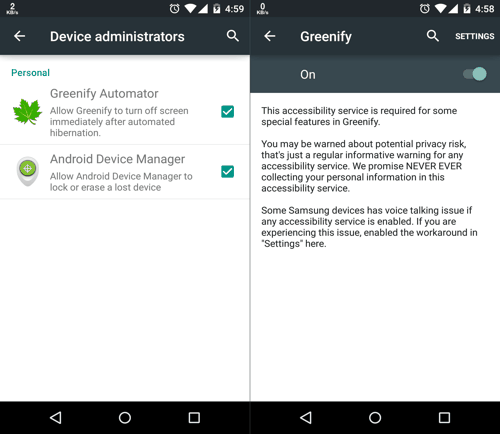 TIP: You can go to Battery Management in system Settings on your device, and identify the apps which are draining your battery the most. This way, the culprits can be easily hibernated later via Greenify!

My advice is that you should hibernate all the apps which are using your resources unnecessarily. There are a few downsides to that as you won’t be getting any updates at all from these apps whenever they’ll be put in a ‘sleeping’ state. Do give it a try though and tell us whether you could notice any improvements, either in performance or battery life. We do need to mention that there’s a Donation version of this app too with a few extra features, but all the bare essentials are already there in the free version.

That’s it for now! Stay charged and don’t forget to share your personal experience or issues in the comments section below.

Get Greenify from here.