This tutorial explains how to find common people followed by 2 Twitter accounts. It can be done using a free service, named as “Twiangulate“. Using this service, you can first add the Twitter handles of two users, and then the service automatically finds people commonly followed by those Twitter users. A pie chart for the same is also created by this service.

The service also provides some valuable information related to common people found by it. It lets you view Twitter handle, followers, bio data, and other information for those people. 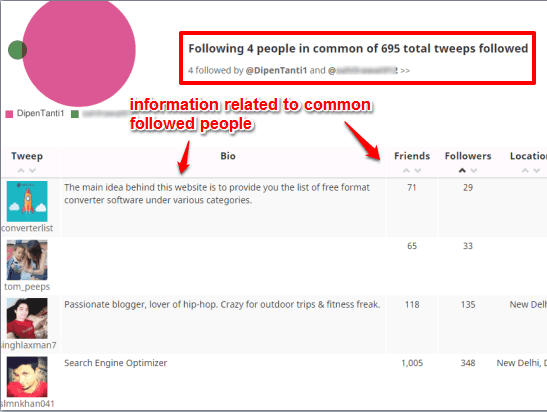 The screenshot above shows pie chart, the total number of people followed in common between two Twitter accounts and information for those people.

How To Find Common People Followed By 2 Twitter Accounts?

Step 2: The service homepage has four different tabs. You need to access “Followed by:” tab. Under that tab, there are boxes available where you can enter the Twitter handles of two users.

You can add Twitter handles of any two users.

Step 3: Click on “RETRIEVE” button and the service will try to find common people followed by both Twitter accounts. It will take only a few seconds. However, if the users are following thousands of people, then the search might take a bit more time. A pie chart is generated and just next to that chart, you will be able to see the number of common people.

When you scroll down the webpage, you can see information related to the users. You can view their Twitter bio, handle, followers, location, etc. 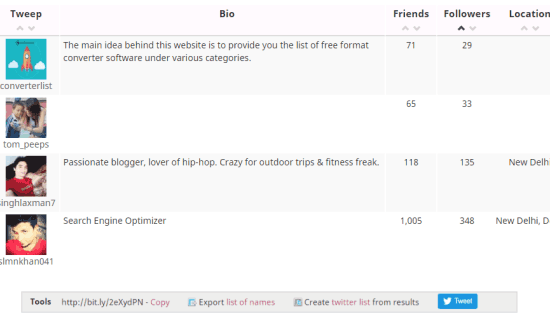 You can also export the list of names or copy the result URL to share with others.

You might have thought of finding the common following people between you and some of your follower or with someone else. If yes, then this service is for you. I really like the fact that how easily it helps you to find the common people followed by two different Twitter accounts. All we need Twitter handles of two users and a few mouse clicks.