Here’s a list of 5 translator apps for Android which you can use to translate text and even speech on your Android powered devices. We’ve all grown accustomed of tools like Google Translate. The trouble is, we can’t use the web version of it on our portable devices. That’s why having an app is a must.

Here’s a list of 5 such apps for Android that can be found in the Play Store. 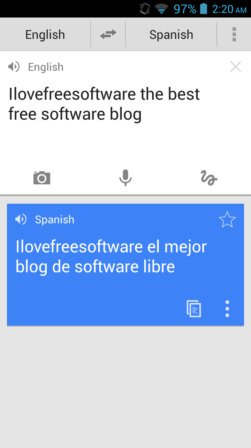 We’ll start things of with a translate tool that everyone is familiar with, and tool that I mentioned in the introduction, Google Translate.

This is an Android version of the app, which allows you to translate between 80 languages. Google has an excellent voice recognition component accompanied by an even better text to speech tool. Text for translation can be typed in or spoken using an excellent voice recognition tool. By turning on the text to speech functionality on the translated text, you can communicate with people in other countries when traveling. 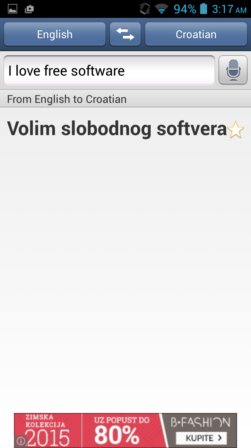 You might think that after everything I said about Google Translate that there’s no need to mention any other translator apps, but there are more of them that we’re going to cover.

iTranslate is actually one of the most popular translator apps on iOS. It also has a very accurate voice recognition module, but it doesn’t have text to speech for reading the translated text. Slightly lower number of languages are also supported, just a couple shy over 50 to be more precise.

Also have a look at 5 Multilingual Dictionary Android Apps. 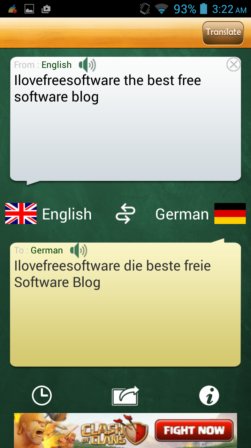 Translator (Speak & Translate) is similar to Google Translate, but it has only around 50. When I said it’s similar, I meant it’s similar in that it has both voice recognition and text to speech conversion. 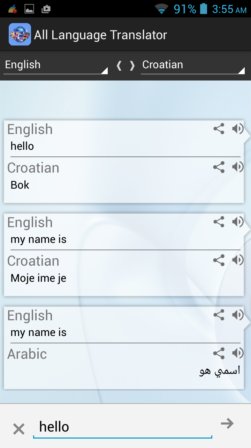 The app can translate to and from 80 languages, supports voice recognition, text to speech and has a nice looking interface which you can see on the image above. History of each translation made is kept at the center of the screen. In the right section of each translation there’s a speaker icon for starting the text to speech conversion. Use the input at the bottom to type in the text for translation and setup the to and from languages at the top of the interface.

Get All Language Translator.

Also have a look at Android Translator to Translate Text in Any App Without Leaving App. 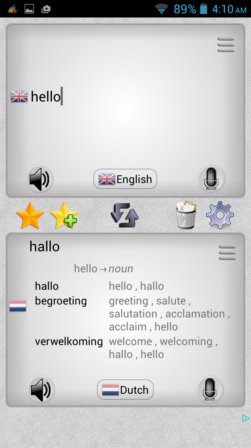 All the usual features are there, voice recognition, text to speech, support for around 80 languages, nice interface and on top of that you also get additional features like translation bookmarking if you need to return to a particular translation.

Google Translate is the standard and used by lots of people, and it’s also my pick when it comes to translator apps. I also gotta say that there’s a lot of interesting alternatives that I mentioned. Take for example Easy Language Translator. Leave a comment down below and tell me which app you think is best.