Here comes a free Windows 10 theme “Ubuntu Theme” to make your Windows 10 PC look like Ubuntu! If you are bored or fed up of using the default themes of Windows 10, then forget all of them and give your Windows 10 PC a touch of Ubuntu interface using this “Ubuntu Theme”. This theme gives your Windows 10 PC a stunning look by making it look exactly like Ubuntu OS interface. It totally changes the appearance of your PC by changing looks of elements, like File Explorer, folder icons, Start Menu, Taskbar, Context Menu, etc. The best thing I like about this theme is that it provides a customizable dock on the desktop screen and also changes the wallpaper with native Ubuntu wallpaper.

You can align the dock on top, bottom, right, or left-side on the desktop screen and also add different files, folders, icons, path, etc. into the dock. It also changes the look of your folder menus, folder icons, file icons, etc in your “Windows Explorer”. Ultimately, this theme gives your PC a great and beautiful look and also provides a customizable dock on the desktop for easy navigation.

The following screenshot shows the desktop after installing “Ubuntu Theme” for Windows 10. 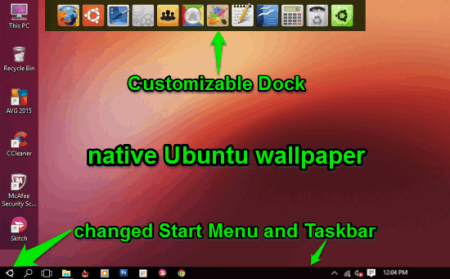 Download and install this “Ubuntu Theme” for your Windows 10 PC from the link provided at the end of this post.

Note: You will need to patch your PC to apply this custom theme. If you haven’t done that already, then follow our easy tutorial about How to Apply Custom Theme on Windows 10. After that, come back to this post, and follow the steps listed here.

As we already know, that this Ubuntu theme for Windows 10 changes the appearance of File Explorer by changing folder icons, color of Title bar, Ribbon Menu, etc. In addition to that, it also changes the elements, like Title bar, Scroll bar, Window buttons, etc. for any program that you open on your Windows 10 PC. The below screenshot shows the changed File Explorer by “Ubuntu Theme”. 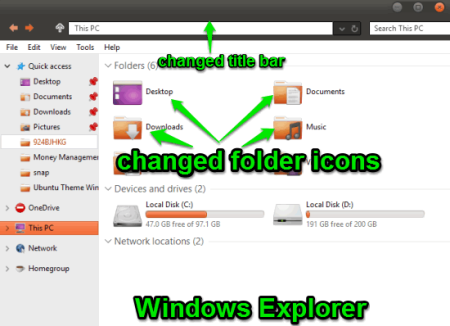 The Ubuntu theme provides other features also for making your PC’s interface look like Ubuntu interface. And one of the best features is the “Dock”.

Now, let us see the advantages of the “Dock” provided by this theme on the desktop screen. You can easily access different files and folders, like Control Panel, Desktop Folders, Libraries, Media Players, Recycle Bin, etc. straight from your desktop using “Dock”. It lets you totally customize the dock, like you can align it to different positions on the screen, add files and folders to it, personalize the appearance of the dock, and much more. If you don’t want to open your File Explorer to browse all your drives and libraries, then simply use the “Dock” to browse them directly from the desktop, without opening the File Explorer. The following screenshot shows how to browse all drives from the desktop using “Dock”. 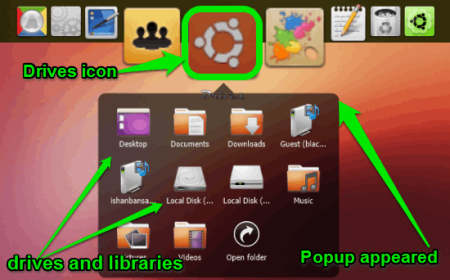 When you click the “Drives” icon on the dock, a popup window will appear with all your drives and libraries as shown above. You can use this amazing feature (Dock) of “Ubuntu Theme” for easy and fast navigation of files and folders.

Ubuntu Theme is a visually appealing theme for Windows 10 PC to make your PC interface look stunning. You might think that the procedure of installing this third-party theme to your PC is a little bit lengthy, but trust me on that the outcome is pretty amazing. It changes the whole appearance of your PC’s interface into Ubuntu’s interface. My favorite feature is the “Dock” which I can easily customize and use it for easy navigation of files and folders.

Try the “Ubuntu Theme” from the link here.