To do this, you can simply open the website, select the 360 degree photo, and start converting it with just a click. It also comes with some additional option to change the video playback speed, size, and output format (WebM or JPG) before conversion. Do note that, if you select the JPG format then it will convert the 360 photo into a series of JPG images.

How to Convert 360 Degree Photos to Videos:

To get started, simply open up the homepage of “360 Photo to Video” and then you will see a “Select 360 Image” option on the left. Click on this option and then choose the 360 degree photo that you want to convert into a video.

After you select the 360 degree image, it will start playing automatically similar to a video on the website. Now, to convert the image, you would need to click on the “Start Capture” option on the left.

Before you click the “Start Capture” button, you can also change various parameters of the conversion including the playback speed, size, and output format (WebM or JPG). For accessing these parameters, click on the “Open Controls” option on the left and you will see those options there. 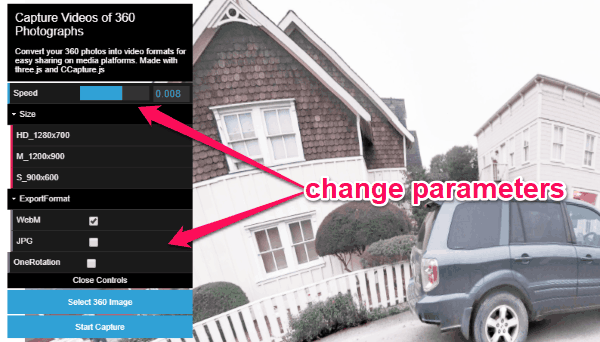 As soon as you click on the “Start Capture” option, the playback will slow down a little and it will start capturing the 360 degree image playback as a video. To convert the entire 360 image into a video, make sure that you let the website play the entire image. To do this, just notice the point at which you have clicked the “Start capture” option and then continue until the playback reaches the same point. Once done, simply click on the “Stop Capture” button. 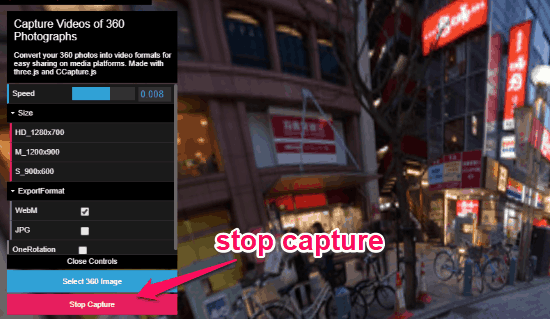 When you do that, it will automatically generate the video as a WebM file. You can save it anywhere you want on your PC. This video can be played with any normal media player with WebM support.

This is how you can use “360 Photo to Video” to easily convert 360 degree photos to videos. Personally, I like it as it doesn’t take much time for conversion. Nowadays, 360 degree contents are a thing on the social networks. So, go ahead and turn your 360 degree images into a video such that your followers or friends can see them without scrolling on the photo or using a VR headset.