This article discusses 5 best image converter software for Windows 10. Image files are probably the most common of all the types of files that we have to deal with on a near daily basis. From family vacation photos to screenshots to wallpapers, they’re everywhere. And just like all other digital files, there’s a huge variety of image formats out there. And this makes viewing all of them quite a problem, as some formats are not really that common.

Not to worry, as there are a lot of good image converter applications out there to solve this problem. They include features like bulk conversion, automatic optimization, previews, and let you easily convert images amongst different formats. Sounds like something you can use? Let’s dig in, and find out more about 5 best image converter software for Windows 10. 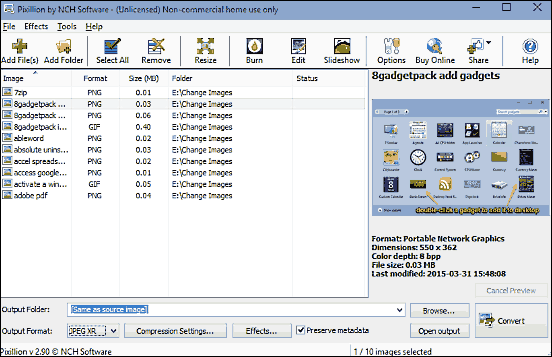 Simple yet feature loaded, Pixilion is the perfect image converter software for Windows 10. The application makes it super easy to convert images in one format to another, and you can do so individually, or in batch mode. Using Pixilion is pretty basic; all you have to do is add the image files (or the folder having the same), specify options such as output directory, target format etc., and hit the Convert button. Before starting the conversion process, you can also specify a few tweaks (e.g. scaling, textual watermarks) to be effected to the converted images, and the added images can be easily previewed in a sidebar on the right. Based on the target format, you can also change encoder/compression settings. Pixilion supports conversion amongst a number of popular image formats such as JPG, BMP, PNG, PSD, and WMP. 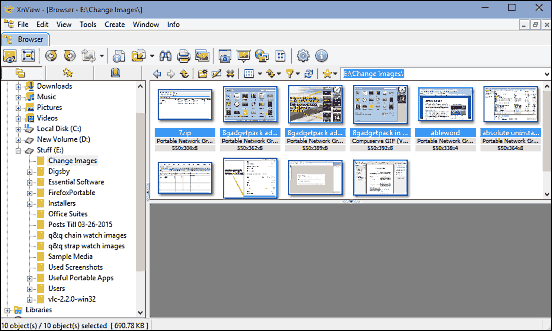 If you’re looking for an insanely feature laden application that not only converts images from one format to another, but does a lot more, look no further than XnView. Rock solid yet simple to use, XnView can single handedly take care of all your image conversion needs without breaking a sweat. The powerful batch processing mode lets you convert multiple images, and you can specify parameters like output directory, whether to keep the original folder structure, ignore read errors, and then some more. XnView supports a truckload of common (and not so common) image formats, such as CIN, IMG, PBN, PSD, and TGA. And yes, support for multi-format RAW images is there as well. But that’s not all. XnView is more of an image editor, so there are a number of other tweaking options like crop, resize etc. as well. To find out more about it, click here. 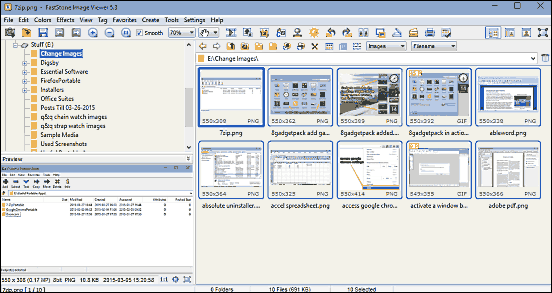 Although its name might lead you to believe that it’s just an image viewer, but FastStone Image Viewer has quite a bunch of aces up its sleeve. In fact, it’s much like a full image organizer and editor, and includes features like the ability to adjust image properties (color, sharpness etc.), make slide-shows, compare multiple images, and much more. Apart from that, there’s a pretty capable image converter functionality that works equally well on single as well as multiple images. All you have to do is select the images that you want to convert in the image explorer pane, specify the batch convert option from the Tools item, and follow the steps detailed in the next window. FastStone Image Viewer supports quite a number of formats, such as JPG, GIF, PNG, TIF, and even PDF. Read more about it here. 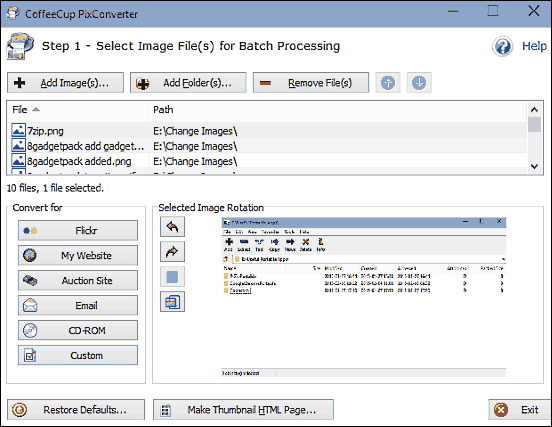 It may not be the best of its kind out there, but CoffeeCup PixConverter does a fairly good job of converting digital images from one format to another. The application is simple, straightforward, and doesn’t really take much time getting used to. You can convert either a single image, or a few of them as a batch. There’s a quick preview pane, and the option to rotate images as well. One very interesting feature of CoffeeCup PixConverter is that it includes a bunch of preset conversion profiles, each having specific settings like output format, quality etc., which can be directly used to convert images for different purposes such as emailing as attachments, uploading to websites, or burning to discs. Of course, you can specify custom conversion parameters as well. CoffeeCup PixConverter supports formats like PCX, TIF, PNG, JPG and BMP. You can also resize the images, and change output quality and colors. Find out more here. 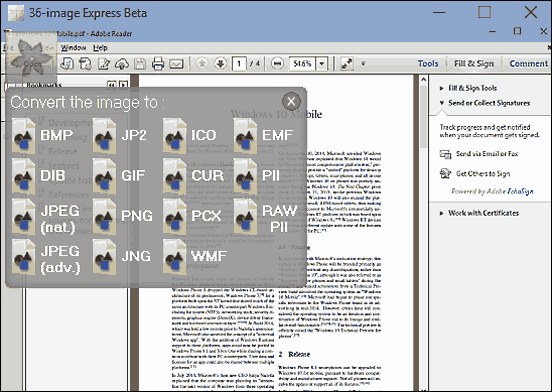 As far as image format converter applications are concerned, things can’t get any simpler than 36-Image Express. It’s a ridiculously bare-bones application that lets you convert images in one format to another in a few clicks. Barring the limitation that it can only work on a single image at a time, 36-Image Express is actually pretty solid. The application’s user interface consists of a black box with a single icon, which you have you hover your mouse pointer on to bring up other options. Converting an image is simple; start off by opening the image that you want to convert and once it loads up, click on the Convert icon. The application will now present the output formats that you can convert the image to. Simply select the one you want, specify the output save location via that dialog box that comes up, and the image will be saved in the new format. All in all, if you’re only looking towards converting one at a time, you can hardly go wrong with 36-Image Express. The formats supported include DIB, JPG, PCX, WMF, and RAW.

If you’ve ever faced trouble viewing images in unsupported formats, the above discussed image converter software for Windows 10 would work just fine for you. Try them all, and let me know your favorite(s) in the comments below.