Here’s a list of 5 Quran player extensions for Chrome which you can use to play and stream audio recitations of verses from the Quran. Extensions that I covered down below will give you direct access to Quran readings made by all the more popular Muslim reciters out there. These players can be left working in the background and you can listen to the readings while browsing or working, as a dose of inspiration and motivation. 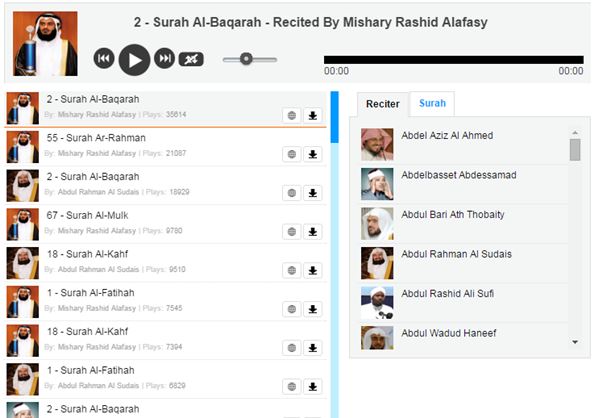 Online Quran Player has a large database of Quran recitations. They can be searched using either the name of the reciter or you can select the surah that you’re interested in and listen only to that.

Player is a web app, meaning an internet connection is needed to listen to the recitations. On the right hand side you can make selections (reciter or surah) and the player alongside a playlist can be found on the left. Recitations can be downloaded, so that you can listen to them in a local player. 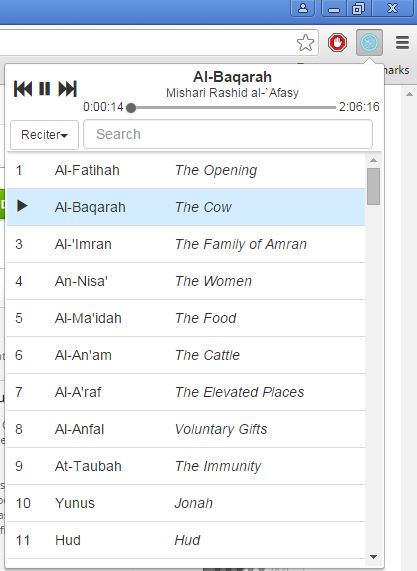 This Quran Player is just like Online Quran Player, only it offers a complete integration into Chrome. Same selections can be made using either the names of the reciters or the title of the surah that you’re interested in.

Where these two Quran player extensions differ is in the availability of the player. Quran Player by Sofwanhaddad can be accessed from Chrome’s top right corner. After installing the extension you’re going to see an icon placed in the top right corner from where surahs, reciters and playback controls can be accessed, see image above.

Also, have a look at 5 Prayer Reminder Extensions For Chrome. 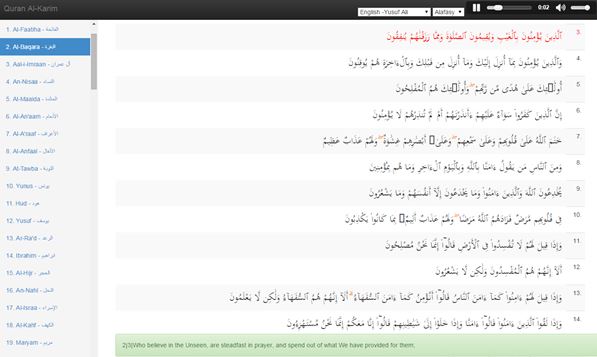 Al-Quran Al-Kareem is an interesting Quran player extension because it offers English transliteration of the verses that are being recited.

Here you get only one reciter. Notice at the bottom of the screen the English transliteration that’s played in sync with the recitation (in green). Use the left sidebar to select the surahs that you’re interested in. List of verses in Arabic takes up center of the screen. 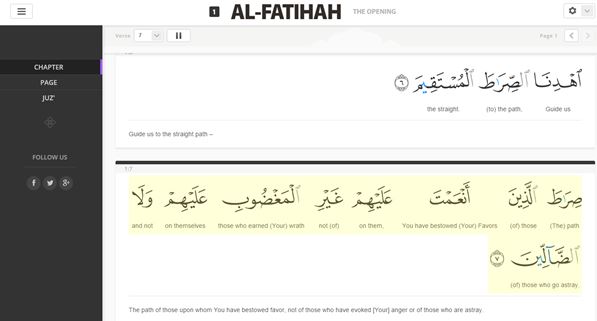 Recite The Quran has even more features that Al-Quran Al-Kareem. Here you also get an English transliteration of the surahs, but it’s not just text, even the English text is recited.

Under each verse that’s written in Arabic, there’s a smaller line of that verse in English. Click on the top left corner play button to start the recitations. Use the left sidebar drop down menus to select which one of the surahs you want to listen to.

Get Recite The Quran.

Also, have a look at Athan (Azan): Automatically Play Azan 5 Times a Day. 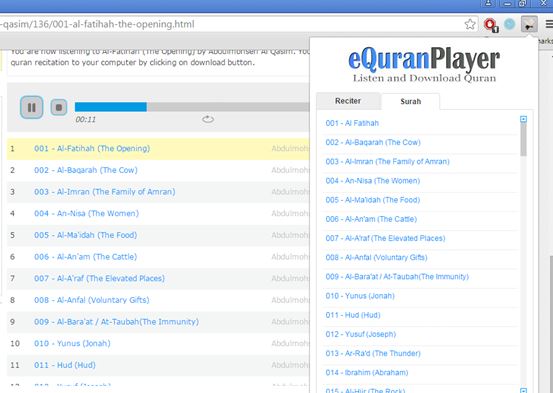 Listen and Download Quran takes it back a notch as it only offers a basic selection of popular reciters and surahs. They can be accessed from a drop down that’s activated with a left click on the top right corner icon.

Player itself is a web app, the top right corner drop down window is only a selector. Recitations can also be downloaded, so you can listen to them in offline players.

I like Recite The Quran and Quran Player by Sofwanhaddad. Recite The Quran offers a translation alongside recitation, which will come in handy for those who are interested in understanding what is being read. Let me know what you think by leaving a comment down below.