Helium Backup for Android allows you to backup your apps and the app data without the need of a Rooted device. You can use Helium to backup your apps and data to your external SD card or your PC. You can also backup SMS, Call Logs, and the User Dictionary (used in predictive input for keyboards). You can either backup the app AND the app data, or choose to back up the app data only, whose data will be restored AFTER you install the specific apps from the Play Store. Read On to

Read On to learn how to backup your apps with Helium for Android. 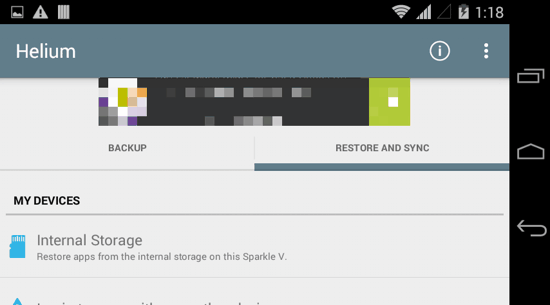 You can also take a look at these other options for backing up data from your Android device. Want to back up only Messages? This Article might acquaint you with the best options out there!

How to Set Up Helium for Android?

Once you install Helium app for Android, you will need to download its PC client on your desktop PC. You can either just download the Chrome Browser Desktop app which you can grab from here; or download the desktop app client setup instead, if you do not a use Chrome on your PC.

How to Backup your Android apps with Helium for Android?

Now most of the things that you do will be handled by the device itself so there’s no need to keep it connected with PC for any longer. And now follow these steps:

How to Backup and Restore Apps Wirelessly with Helium for Android?

Helium for Android has a pretty neat option hidden in the 3-dot menu button. Just tap it and follow these steps:

As you must have figured out by now, Helium is THE app you need if you ever want to format your device or end up losing your data somehow. Helium Backup for Android can easily backup all your apps and apps’ data and the SMS / Call Logs backup is an added bonus! This kind of functionality is easily available in other apps if you have Root, but for non-root users, Helium is the way to go. The free version of the app works flawlessly and can perform most of the essential backup functions easily. The premium version adds cross-device synchronization on Android and has Cloud Backup option (the option seems to be present in the free version too, but I have no idea whether it’ll work or not since the developer has clearly stated that it is ONLY available with the Premium version of the app). Just go ahead and download the free version itself. And don’t forget to share any issues that you face or queries you might have.