Writage is a free markdown plugin for Microsoft Word to create, edit, and save markdown files. The principle thought of Writage is giving a chance to write in Markdown to the individuals who like Microsoft Word. You can create and edit markdown files with extensions such as .md, .markdown, and .txt in Word. No more use of core markdown editors with the complex interfaces as you can use “Writage” to do so with ease. One of the best parts of this plugin is that it adds a separate option of “Markdown” with “Save As Type” in Word. That means you can now convert your .doc files into markdown files using this plugin.

You might have used many online markdown services such as Socrates, CuteMarkEd, or Dillinger, and they lack rich tools and features as of Microsoft Word. So using “Writage” for editing and saving markdown files instead of drilling into editors with markdown syntax would be a great idea. It supports many markdown elements such as headings, numbered and bullet lists, links, bold and italic font style, etc.

The following screenshot shows editing a markdown file in Word. 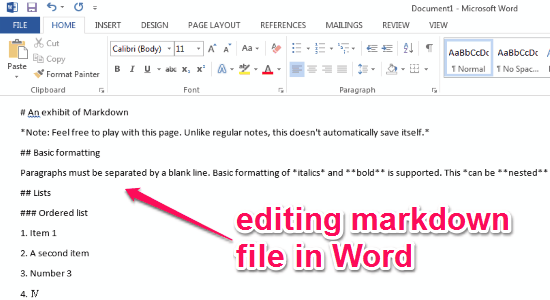 Note: This plugin requires “Pandoc” installed on your PC for converting docs, and you can download it from the link here.

How to Create, Edit, and Save Markdown File in Microsoft Word:

At first let us see the procedure of installing “Writage” below.

Step 1:  Download this plugin from the link provided at the end of this post or from the homepage.

Step 2: Double-Click the .msi file to proceed further. It will check that Pandoc is already installed or not, if not then it will ask you to download it first.

Step 3: Pandoc is always used by this plugin in the background for working properly.

How to use this plugin:

Step 1: After installing this plugin, it makes MS Word to work as a markdown editor. That means you can open and edit markdown files in Word as you do for other documents. Simply click the open button in Word and choose any markdown file to edit as shown in the above screenshot. The following screenshot shows how to open a markdown file in MS Word. 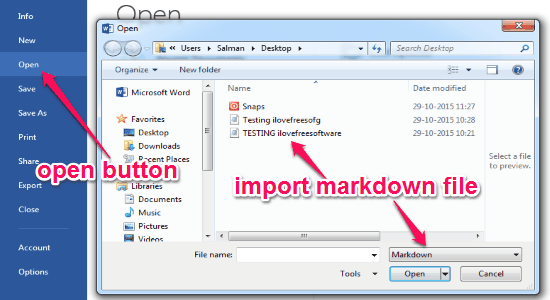 Step 2: It also lets you save your normal .doc file as a markdown file without using any other converters. Select the “Markdown” option from “Save As Type” field to convert and save .doc files into markdown files. The following screenshot shows how to save a .doc file as markdown file. 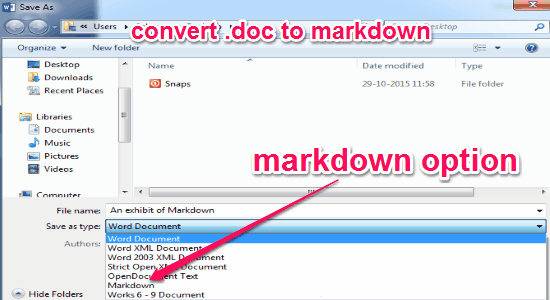 Some of the benefits of using “Writage” are:

Writage is a very useful plugin for Word which lets you create, edit, and save markdown files with ease and simplicity. You can also convert your normal .doc documents into markdown files. If you are a rookie with all the markdown syntax stuff, then this plugin is definitely for you.

Try this markdown plugin for Word from the link here.