Programming languages are (and always have been) a fundamental aspect of computing technology. With that being said, there are Markup Languages, which can be loosely considered as special type of programming languages, as they are specifically used for annotating (or marking up, hence the name) documents, so that they stand out from the regular text. And one very important and popular markup language is Markdown. But why am I telling you all this?

That’s because Socrates, the focus of this blog-post, is all about Markdown. A minimal online markdown editor, Socrates lets you type away content and annotate it with Markdown formatting, directly from your browser. What’s more, it features live preview, so all the markdown formatting is rendered in real-time. Interesting? You know where to find the answers.

How To Use This Online Markdown Editor With Live Preview?

Step 1: Arguably the best thing about Socrates is that it ridiculously straightforward to get started with. There are no free accounts, no signups, no plug-in installations are anything else of that sort required. Simply head over to the web service’s homepage, and get typing. Here’s how Socrates’ web UI looks like: 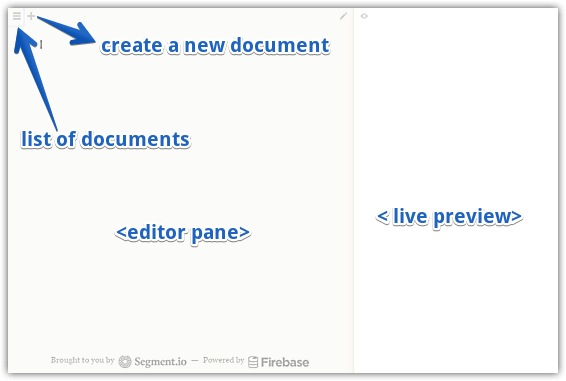 Looks pretty, blank, right? Having one of the most minimalistic user interfaces ever, Socrates consists of almost nothing in terms of visual elements. The light UI is essentially divided into two panes. The left pane is where you type in the text with markdown formatting, and the right pane is used for live-previewing the markdown formatted text. A hamburger icon on the top left corner lets you access the list of documents, whereas a “plus” icon can be used to create a new document. As simple as that!

Step 2: Ideally, there’s no second step. All you have to do is start typing with markdown formatting in the left pane, and right pane will show the formatted output. That’s all there’s to it. Simple, isn’t it? Take a look at the screenshot below: 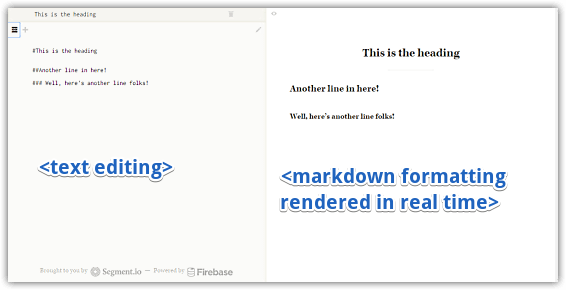 Socrates is a pretty great online markdown editor. It may not be having tons of features and sharing options, but it works fairly well if you’re looking forward to churning out quick markdown formatted text. And the live preview makes things even better. Give it a shot, you’ll love it.