Talk.to is a relatively new company which focuses on developing cheap ways of communication between people and bushinesses. Today we’re gonna have a look at their Talk.to application which allows its users to send instant messages for free across two most popular social services that have instant messaging, Facebook and Google Talk. Even though there already are several applications which allow you to communicate off-site with friends that you have on social networks, Talk.to is special because it can be used not only on PCs but also on your iOS and Android smartphones, which are becoming more and more popular these days. 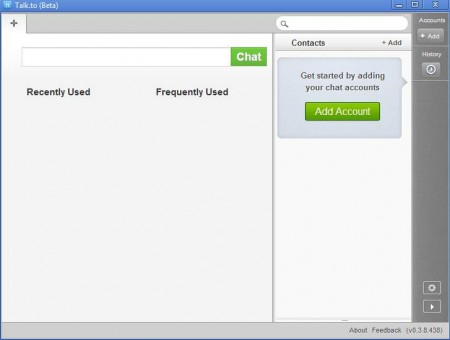 What you see above is the default window of Talk.to, notice the word Beta in the windows title. That’s right, this software is still in beta, so be prepared for the application to misbehave from time to time. The interface is very intuitive, once you’ve added accounts from social networks to Talk.to your contacts should appear in the list and you can start sending messages to them via the messaging portion of the interface on the left.

Currently Talk.to is available as a standalone download from Windows in which the program comes bundled with Google’s Chrome, which has to be installed on a machine in order for Talk.to to work. This free instant messaging software needs Google Chrome because it uses its engine to access Facebook and Google Talk while the accounts are being added, but also for the purposes of the actual chat. If you already have Google Chrome, then there’s nothing for you to worry about. But if you don’t then you’re gonna have to install it, if you are a Windows user program offers you to install Chrome automatically.

To start chatting and sending instant messages to your friends on Facebook and Google Talk you’re gonna have to give Talk.to access to your accounts. This is where privacy issues might become a problem to some, but this is a trusted application and there shouldn’t be any problems with account theft. Right after you first run the program you’ll be presented with a window where you can sign into your favorite networks: 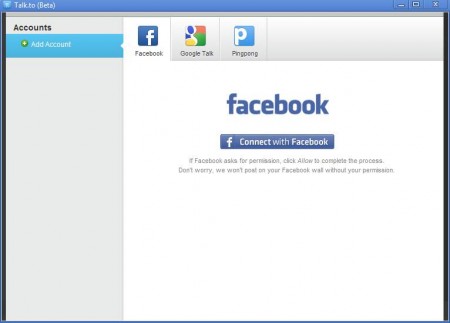 Next to Facebook and Google Talk there is also choice to connect using Pingpong, we’ll leave that one alone for the time being and focus on Facebook. Click on Connect with Facebook and you will be presented with a Google Chrome window where you can enter your login information: 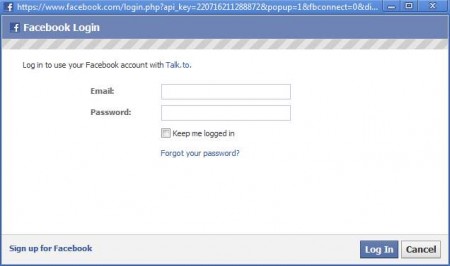 If you’ve entered proper data, the main window should appear and it should be populated with your contacts. If you are using Google Talk repeat the same steps you did for Facebook and you can start sending instant messages to your friends.

Talk.to for iPhone, Android based phones, Linux and Mac

And now for the best thing about Talk.to, it’s availability. If you open up the download page on the Talk.to website you will notice that they are offering downloads for all the major operating systems but also for iOS and Android, which means that you can use Talk.to on all your devices, without having to use several different programs. This makes Talk.to a very useful app, even if it’s Beta, you should try it, it’s free.