Here’s a list of 4 gesture music player apps for Android. When I say gesture music player apps, I’m referring to audio players that can be setup to play the next song by shaking the device, or to change the song through the use of some other device sensor. Normally to change the song when I’m listening to music on my phone I need to turn on the screen and tap on a button. That’s why I decided to have a look at what kind of music players are there that support controls, any kind of controls via gestures.

Join me and we’ll find out together. 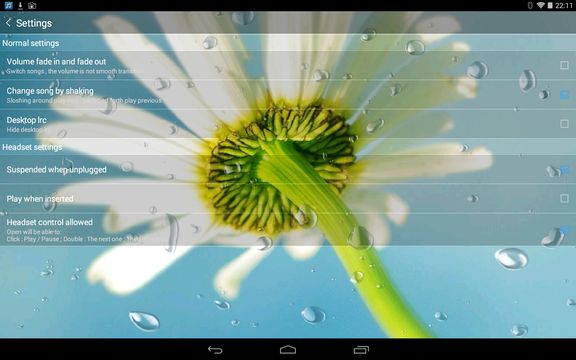 Music Player by Leopard V7 is a gesture music player app for Android that lets you change music tracks with shake gesture. App uses sensors to detect when you shake the device and once you do shake the device song is changed.

Shake to switch song option is turned off by default. You’ll have to open up settings and activate it there. Songs can be switched even when the screen is turned off, which is great for when you want to change a song without unlocking the screen. Other than supporting gestures this music player is pretty much a standard music player app. Upon launching the app, you’ll see your library categorized based on album title, artist name, etc. Playlists can be created, there are equalizer presets, a selection of background skins, and more.

Get Music Player by Leopard V7. 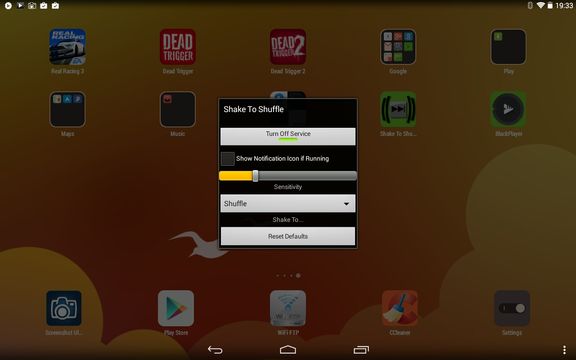 Music Player by Leopard V7 is a full fledged music player app, and if you are interested in its shake to change song functionality, you’ll need to use it instead of your usual audio player app. Shake to Shuffle changes that. It allows you to use shake gestures in pretty much any music player out there.

Shake to Shuffle is not a music player, but rather a background service that connects with the currently active music player and lets you change song, pause/play music, lock screen or hang up a call using shake gesture. As you can see, this app adds much more than just your basic shake to change song functionality. What’s more, shake gesture sensitivity can be configured. Status icon in the notification area is available, but it’s optional (needs to be activated). All the settings that Shake to Shuffle has to offer has to offer can be tweaked after launching the app.

Get Shake to Shuffle.

Also, have a look at NexMusic: Android Music Player App with Material Design. 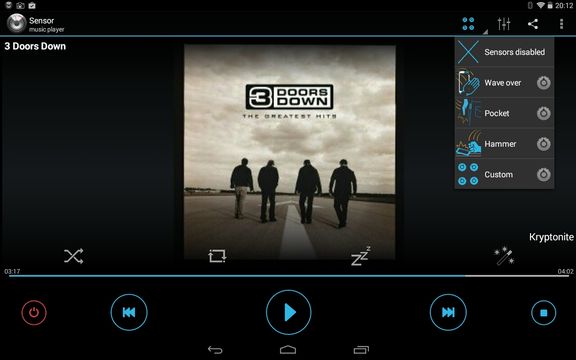 Sensor Music Player is another full fledged music player app with support for gestures. Note that the version linked down below is the trial Google Play version. Free version of the app is also available on the developers Facebook page. You can read more about how to download the free version in the description text of the trial version that I linked down below.

Instead of supporting only shake gestures, Sensor Music Player lets you use pretty much any sensor that your device has. Hand wave (uses proximity sensor), pocket tap, shake are just some of the available controls. Others are configurable depending on what kind of sensors your device supports. I really enjoyed using the pocket tap gesture because it allowed me to change music without removing the phone from my pocket. Note that if you want to use a different sensor, you’ll need to choose the “Other” option from the top right corner sensor setup menu. Setup wizard will guide you through the new gesture setup using the sensors that your device has. 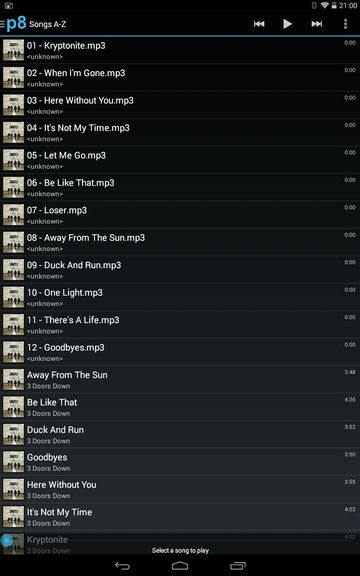 Passion8 is an extremely simplistic music player, the simplest music player out of all the gesture music player apps that I tested. It’s so simplistic that only a single playlist called “quick” list can be created. Songs are added to it from the main A-Z song list where all the songs from your music library are located.

Gesture control available in Passion8 uses wave gestures, similar to that found in Sensor Music Player. You’ll of course need to have a proximity sensor on your device. Note that you’ll need to activate the wave gestures by tapping on the top left corner menu button. After gestures are activated, you’ll just need to wave your hand in front of the screen (proximity sensor) in order to switch songs. It will also work if the screen is turned off. There’s no need to unlock the device in order to change the current track, which will save you a lot of time and hassle.

Also, have a look at 5 Minimalistic Music Player Apps For Android.

Out of the 4 gesture music player apps for Android from the list above, the two that caught my eye the most are Shake to Shuffle and Music Player by Leopard V7. These two worked great when it comes to shake gesture controls, and in case of Shake to Shuffle, there’s lots of advanced settings, gestures to activate and so on. Leave a comment down below and let me know which music player apps with gesture controls you use.