Special Force Anti-terrorism is a free Windows 8 action game app. The gameplay of this Windows 8 shooting game app includes killing all the terrorist dead that are hiding in different locations.

The whole game is divided into levels, which are basically locations. You’ll carry 3 guns in every level which you can use to kill the terrorists. The objective of this game app is to kill the given number of terrorists in a level before your life runs out, and advance to the next level to clear all the terrorists coming from all the locations. 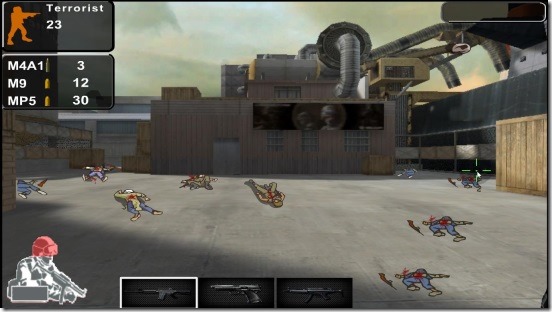 Well the game objective is very simple and clear: Go to a location, and kill all the terrorists hiding there. 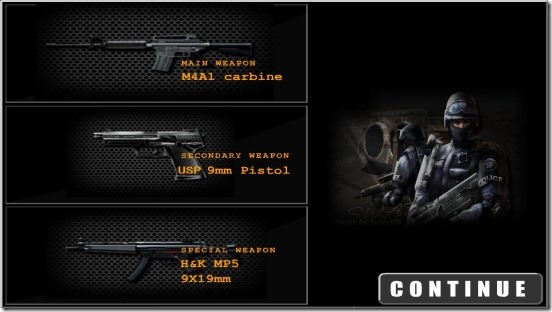 You get three deadliest guns filled with enough ammo: M4A1 carbine, USP 9mm pistol, and a H&K MP5. The carbine will be your main weapon. But you can change to any of the weapon during the gameplay. All you need to do is, simply click on the desired gun from the guns list that’s available all the time at the bottom of the screen. The option to change the gun during the game play is pretty cool.  You don’t need to pause, or leave a level (that is mission) to change the weapon. 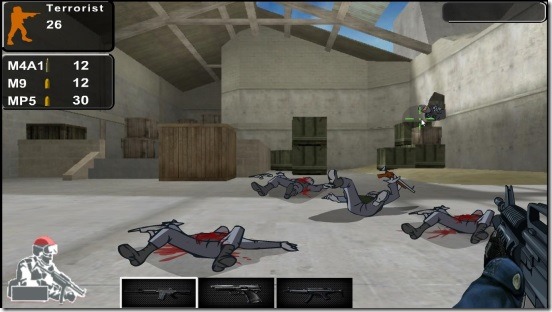 The game is in 2D, therefore doesn’t put too much pressure on your Windows 8 devices. Also the game controls are quite easy. The mouth of the gun (that is the crosshair) follows your mouse movements, and all you need to do is aim at the enemy and left click to fire. You can keep pressing the left mouse button to fire continuously without any breaks. But you have to watch out your ammo, because it might run out. So, don’t waste your ammo (bullets) just firing blindly. 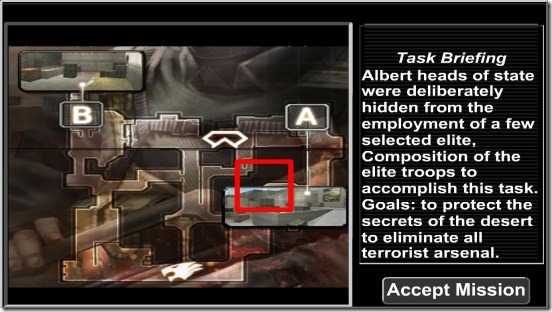 The initial stages are bit easy, and there will be less number of terrorists in initial missions. They’ll be hiding behind walls, boxes, wall holes etc. And they just pop out from their hiding places and fire at you suddenly. You have to shoot them dead at that very moment. A terrorist can be killed by just one bullet, provided you manage to hit him in his head, and if you hit in other body parts, then he might take 2 to 3 bullets to die. Your life meter is at the bottom left corner of screen, and every time you get hit, it reduces. So the objective is to kill all terrorists in a location, by using the fire power that you have got, and before your life meter goes empty.

Here are some other fast-paced action game apps for Windows 8, that you might want to check out: The Slunchies, Judge Dredd vs. Zombies, and Zombie HQ.

Special Force Anti-terrorism is a good Windows 8 action game app. The simulations are really smooth, also it not a heavy game at all. The game is not too big, so you can play the game during holidays, whenever you are free, and complete all the missions. The gameplay is good, but it can be better. For example, making terrorists come from different places rather than just the same spots. Also the game doesn’t saves your progress in the game. Still, it has the ability to keep you busy for a while. All in all a good to play game app for Windows 8 users.

If you are a big army fan, then here’s a cool Army Academy – Alpha game app for you.