Army Academy – Alpha, is a free Windows 8 army game app. Well the backdrop of this fun Windows 8 game app is, you are a new recruit to the army, and the meany sergeant is putting you through lots of training, so that at the end of training, you’ll come to be a Grand Master Sergeant. The game play of this Windows 8 army game app is sure fun and completely satisfies the slogan of the academy which is “Turning maggots into men!”. There are 63 levels to complete. All levels are grouped under 7 different stages of training. In each stage you’ll be tested in land, water, and jungle, which are the three locations of the game. The game is in 2D and shows the game from side camera view. 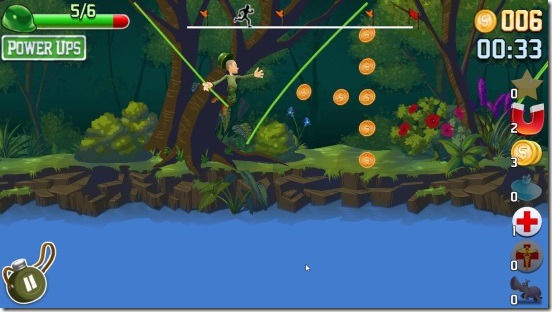 This Windows 8 army game is sure fun for all. If you have played Super Mario, then you’ll like this game as well. Because this Windows 8 army game app is somewhat based on same concept of gameplay. Here, you have to run, jump, swim, climb, and go across through snakes, spiders, drones, dangerous fishes etc. That is you’ll be placed in the harshest conditions ever. At the end of each level the goal is to safely reach to the end point of the run/swim. There’s no time limit though, so you can take all the time to reach to the finish line. 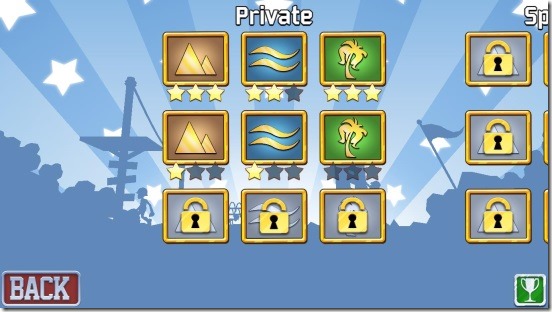 Besides running, climbing, jumping over the cliffs and through jungle’s creeper; you also have to avoid or fight different dangerous insects and animals, and also collect as many coins as possible on the way. You can use different powers, during the gameplay, that can help you to grab more coins and staying alive, so that you can make it to the finishing line. 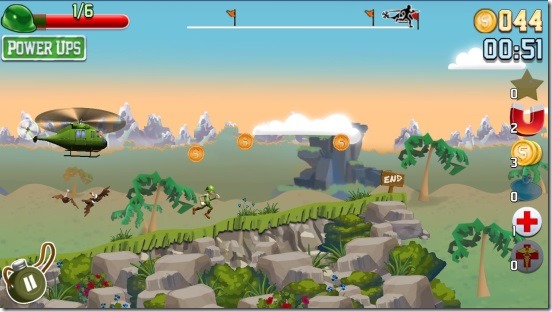 That was the gameplay of this Windows 8 army game app. The game controls are pretty easy, it’s actually made for touch devices, with touch controls; but the mouse controls are also equally good. The game controls are all about mouse clicks. Click drag towards right to sprint, and click drag towards left to slow down, click once to jump, and click drag downwards to slide. Complete a level to advance to next higher level. You can add the powers to your inventory before going to a mission (level), and use them during the gameplay. However these powers come for a cost. And the cost is the coins that you collected during your run. If you don’t have enough coins to buy a power then you can play the completed level and, collect some coins. 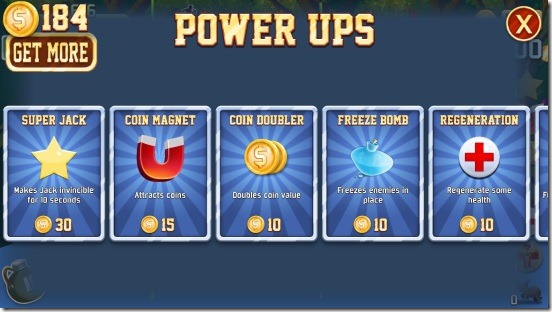 This Windows 8 army game app has a good difficulty level, with the land being the easiest and the jungle being the toughest. I found jungle toughest because here you have to jump through the moving creepers, which is not at all easy, you have to wait for the right time before jumping, or else you’ll fall in the water. And to make it even harder, there are different types of insects and animals that can hurt you. Also at the finishing line of the jungle’s location, you have to jump to reach to a ladder hanged to a chopper, and that is the toughest part of the location.

Get this Windows army game app from the Games Category in Windows Store or Get Army Academy – Alpha here.

If you have watched the latest Judge Dredd series movie, then check out this Windows 8 Judge Dredd action game app: Judge Dredd vs. Zombies.