Running Dude is a free Windows 8 Action Game app. It is an action adventure running game app. The game play of this Windows 8 game app is, you have to keep running until you don’t die by falling off the suspended paths (tracks) or by coming in contact with an enemy. You can shoot the enemies dead with different types of guns that you can grab while running; or jump over them and the gaps between suspended platforms. This game is one of it’s kind, because it consists of many mind boggling twisted effects, that can either make the game very easy or quite difficult for you.

If you love action adventure game, then this is the game app for you. Get this Windows 8 action game app from the Games Category in Windows Store. Use the Windows 8 Search charm (Win + Q) to locate the app in Windows Store, or use the download links given at the end of this article. 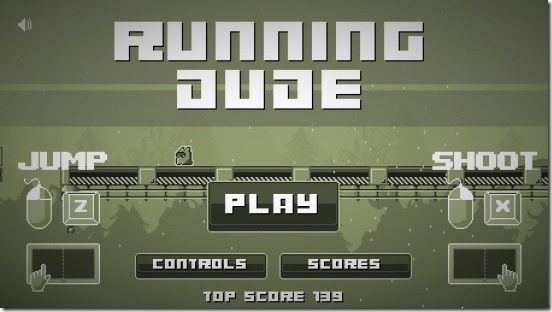 Running Dude, sure is a fun Windows 8 action game app. The game is made in a retro style, like the traditional arcade games of 80s’, with all those pixelated graphics. Still the app is pretty cool. The game is played from the side camera view. The gameplay of this Windows 8 action game app, is what stands above all the features of this game app. It’s very unique! Unique, because, the effects are so cool, at one time the whole game screen gets inverted downside, but the game is still on! And at other times, the screen starts shaking and twisting, madly! which makes it hard to survive, but interesting to play. Plus during your run you can also grab different boxes, they actually give different weapons, (that you can use to kill the incoming enemy) and different types of mechanical machines like jetpacks, robotic legs etc., or nutty effects, like mentioned above. 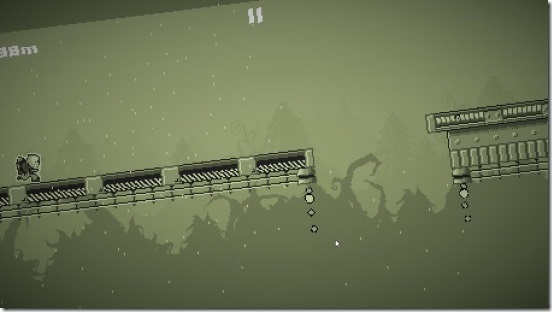 The gameplay of this Windows 8 action game app is flat straight and simple. And that is to achieve the longest run, without dying by avoiding touching enemies or killing them, and jumping over the gaps between suspended platforms. You’ll get 3 hearts as lives. Achieve your longest run until all your lives get used up and the game gets over. You’ll compete against players from around the world to get to the top in the Global Leader Board. 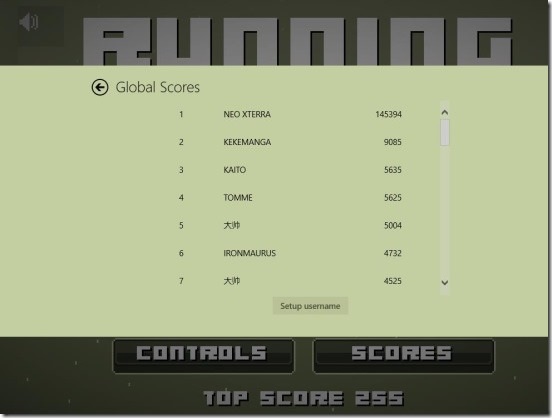 As it’s an infinite running game, so you’ll keep running, until the game doesn’t get over. The game difficulty increases as the run distance increases, that is the longer you run the harder the game gets; trying to kill you in every step you take. The game controls are very easy, and works great. Here are the controls and there functionalities: z or left mouse click to jump, and x or right mouse click to shoot. And unlike some of the game controls that take longer time to act, the game controls of this Windows 8 action game app works the moment you press respective keys or clicks. This is another good thing that makes Running Dude good game app.

Besides these it works in offline mode, that is you don’t need internet to play the game. Which is a great news for the games lovers as they don’t need to be connected to internet all the time. 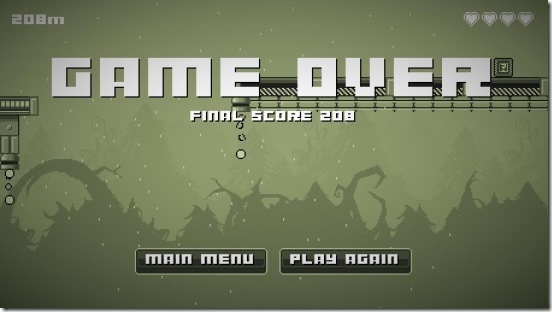 Do check out these free Windows 8 RPG games: Reaper and Agent P Strikes Back.

Running Dude, certainly is a good Windows 8 action game app. I haven’t played a game with effects like this before, which was exciting and fun. I had a great time playing the game. It works without any errors, and does what it advertises. It’s creative, fast paced, challenging and cool! All in all a good Windows 8 free game.

If you love racing games then you might also like this free Windows 8 racing game app: 3D Boat Race.