Agent P Strikes Back is a free Windows 8 game app. The game is based on the cartoon character named Perry (Agent P), of popular cartoon series: Phineas and Ferb. The gameplay is about guiding Agent P by using keyboard arrow keys, through 3 stages and complete the game. You have to locate and free other agents as you fight various robotic guards and Platyborg (villain) at the end of each round. It is one of the lightest Windows 8 game app available in the app store. 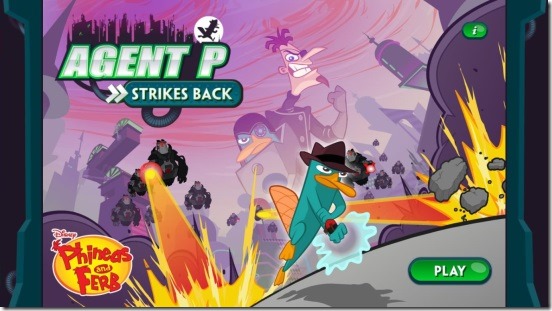 Agent P Strikes Back is a side-scrolling action-adventure game app; like the classics: Contra and Super Mario TV video games. This Windows 8 game app, is all about finding other captured agents, and jumping, firing, and collecting multiple tokens scattered here and there in each level. It is compulsory to rescue other agents, because without rescuing them you can’t advance in a stage. There are various locked passageways in each stage, and freeing agents opens up these locked passageways. 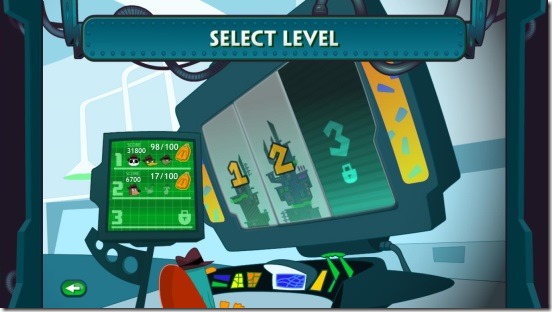 In each stage you’ll start up with filled life meter. But fighting against the robotic guards, does reduces your life meter. But, there’s no need to panic as there will be different power ups hidden throughout the level. These power ups fills up the lost life meter. Besides collecting these power ups you can also collect tokens. These tokens give you points to score. It is not compulsory to collect all the tokens, but collecting them gets you to high scores. There are basically two types of tokens: Gold and Platinum. Gold tokens are worth 100 points and Platinum worth 500. 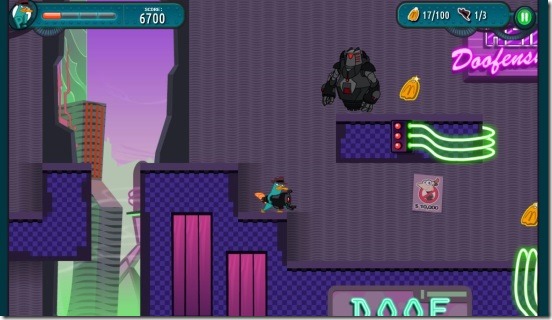 During the game play you’ll get different electric cables. You have to avoid them by jumping. Also you have to fight multiple robotic guards. At the beginning you won’t have any weapon, but you can get one by going near to a guard and pressing Space Bar of your keyboard. This actually takes one of the guard’s hand off, which is quite funny. You can use this arm to fire on the guard. Again press space bar to fire. One important thing to notice here is, if you are carrying a weapon, then, you can’t jump higher, so you need to drop it. Press Down Arrow key to drop the weapon. In case you need the weapon again, just pass by the weapon. 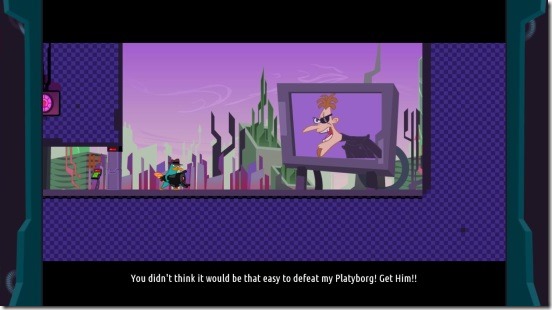 The game controls work fine. Use these arrow keys to control Agent P: up –> jump, down –> drop weapon, left-> to go left, right-> to go right. Also press up arrow twice to jump higher. At the finale of each level you’ll face Platyborg , he’s pretty fast, so be careful while fighting against him, and try to keep distance. It’s little hard to kill him, as he’s the boss. But ultimately he does dies.

Agent P Strikes Back, certainly is quite a good Windows 8 game app. I had lot of fun playing the game. Though it’s in 2D and there are only 3 levels. Still, this doesn’t stop the game from being an interesting and fun game. It’s totally functional, has got a good game play. I totally loved the game app. Definitely worth a try!

If you are zombie fan then try Zombie HQ game app for Windows 8.

Get Agent P Strikes Back here.