Spades app is a free Spades app for Windows 8 and using this app you can now play Spades on Windows 8 PC. As everyone knows, Spades is a classic card game, which is played either as a pair or individually among two or four players. Each player makes a bid at the beginning. The bid is actually the total number of tricks the player thinks he can win. The objective of the game is to achieve the bid.

In this version of Spades app, you’ll be playing as a pair, and you’ll get two other opponents (computer generated). Like the real world Spades, here also you have to make a bid and achieve it. If you are able to achieve the bid then the game awards you with points, called Sandbags or Overtricks. The game continues till one of the team reaches a set number of points, which is 500. 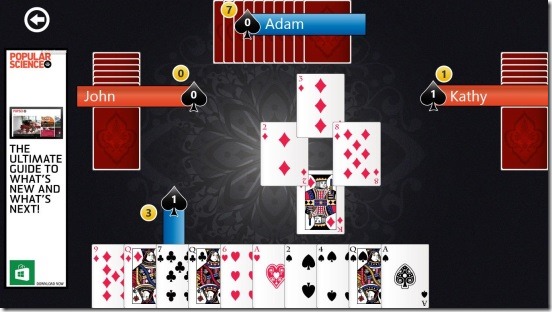 To download this Spades app go to Games Category in Windows 8 Store and then browse for the app, or you can also make use of the Windows 8 Search Charm, or just use the URL given at the end of this review.

This Windows 8 game app is developed by Random Salad Games, which also develops other game apps for Androids, Windows 8, and Windows Phone. The app is well designed, and has good graphics. It works quite fast.

One good feature of the app is that it tells all the rules and regulations of “How to play Spades” within the app itself. Plus it also tells the scoring rules. It is a good idea to quickly go through all of these, before you start playing. Besides these, the app also shows you the game stats, such as: total games played, total games won-lose, total points earned, total tricks played etc. 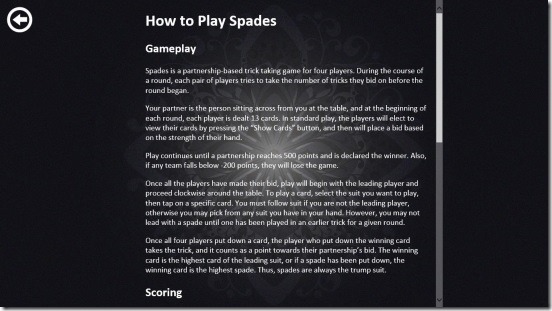 The gameplay of the app is excellent. You’ll get three more players besides yourself. These are basically computer generated players. The one who’s in front of you is your team mate. Each play gets 13 random cards from different suits at the beginning of each round. Before you make a card deal (show the first card), you have to make a bid. The app gives you options to either view all the cards before you bid, or bid without viewing the cards, which is called “BLIND”. One good advantage of this options is: if you are able to achieve the bid number, then the app will award you with heavy bonuses. Now the beauty of this game is, the higher the bid, the more points you can score (provided they are met). If you aren’t able to meet the bid then there are penalties in form of negative scoring. Also there are penalties for bidding too low! 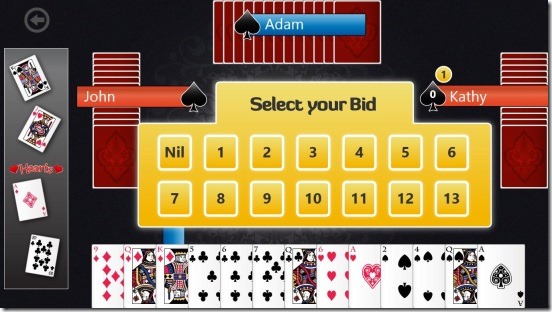 This Windows 8 game app is equally good for both Newbie as well as a Pro. If you are a beginner then you can play in Easy Difficulty and Standard Mode, and if you really want a challenge then you can play with Hard Difficulty and in Suicide Mode. The only difference between Standard Mode and Suicide Mode is: in Standard mode all the default standard rules are applied, and you have to play to reach 500 points. And in Suicide Mode one player from each team has to bid nil, and there won’t be any blind nil. If any team falls below -200 points, then the game ends for that team. 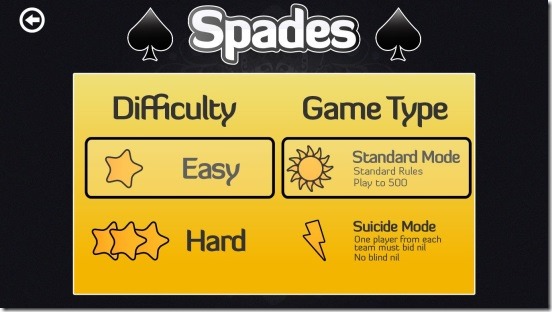 Note: Blind nil is a situation where you chose to play blind (explained above) and try to bid nil. Also those who don’t know how to play Spades, well they can use this link to learn playing spades. 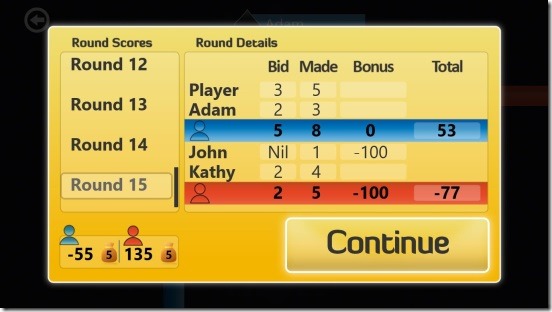 Spades app for Windows 8 is a good Windows 8 game app. It requires you to use your brain. As a tip, remember the cards that are getting dealt, and if your teammate is wining a trick, then don’t deal the higher cards. This game is functional and fulfills its purpose. Playing Spades in the app was good experience. Too good, actually, and I spent too much time playing it during review (and that is why you won’t see a review from me tomorrow). Definitely a good free Windows 8 app to try your hands at.

Also if you are Pacman fan, then do try this Pacman Game app for Windows 8.