The Slunchies, is a free Windows 8 shooting game app. It is a very simple but fun game app. Well, the gameplay of this Windows 8 game app is about you, shooting at the mutated and infected slunchies. Slunchies are cute little creatures, that got infected in a bad way and have turned into evil, all because Walton (that is the doctor) met a girl, and something went wrong between them. But thankfully, he has formulated an antidote, which can turn the evil slunchies back to the cute little creatures again. So, it’s you who have to use the antidote in a gun and fire at the slunchies to heal as many slunchies as you can. 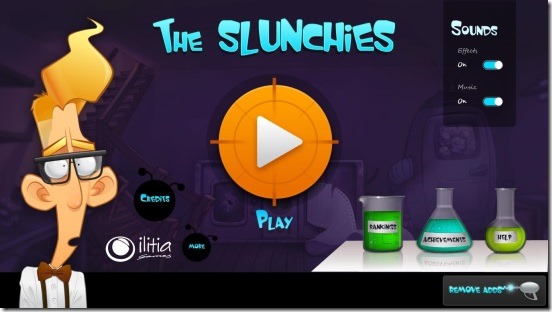 The game has a good gameplay and there are various achievements and bonuses that you can play for. However, the main objective of this game is to get to the top in the world leaderboard, by healing as many slunchies as you can.

The rules of this game are very simple. You get 60 seconds in the game. In that time you have to shoot and heal as many slunchies as you can. But the cool thing is you can also add more time to the given time so that you get more time to heal more slunchies. And the trick to do that is to shoot-heal some special slunchies (the mutated ones). Also there are two other special type of slunchies called Taunty and Speedy, and healing them gives you achievements and bonuses. These two are special ones because, they don’t come and go from the path which other infected slunchies do. They appear and go suddenly and randomly at the top of the screen. On the other hand, rest of the slunchies just pop out from both the sides of the screen, and go to the other end; as if they are jumping from one end to other end.

Even though the regular infected slunchies come and go from the sides of the screen and they are more in number than the special ones. But each one has different jumps heights and reach. Some jump high, while other jump low. Some have long jump and some have short. And that is the fact, that makes the game a bit difficult for you. And you should also know that each slunchie carries points. So the more slunchies you hit the more scores you’ll score. 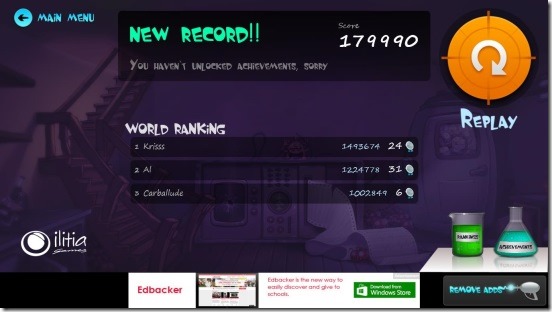 The game play of this Windows 8 shooting game app sure is fun and challenging. You have to constantly put all your concentration on the screen because most of the time the screen is covered by the flying slunchies, they just come randomly from every side (except bottom) of the screen. So you have to keep looking on every side so tht you don’t miss an infected slunchy. Your position as the shooter doesn’t changes, however your character turns left and right constantly. 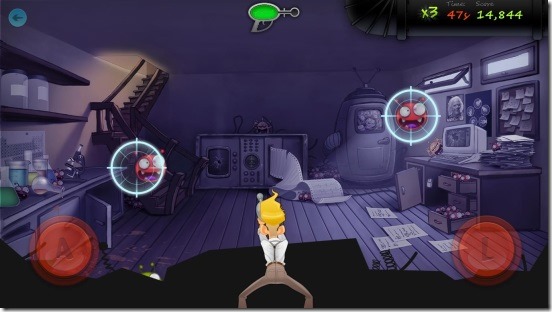 There will slunchies everywhere on the screen, but you just can’t go rogue and shoot blindly; the gun you will be using also needs to be cooled down, because if you miss too many slunchies, then it can get overheated. As a result you can’t fire till it cools down. So, make sure that you don’t fail too often.

You’ll get two crosshairs to shoot the regular infected and mutated slunchies, which automatically aims at the slunchies. Plus a third crosshair also appears in the screen whenever a special slunchie appears on the top. So, whenever any slunchie comes in the point of crosshair, all you have to do is fire using A and L keys, and use Spacebar to shoot special slunchies. 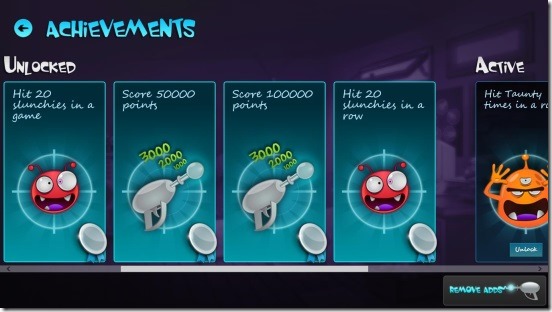 Shoot as many slunchies as you can in given time period, and score more to grab achievements, time bonuses, score multipliers and to get to top in world leaderboard. 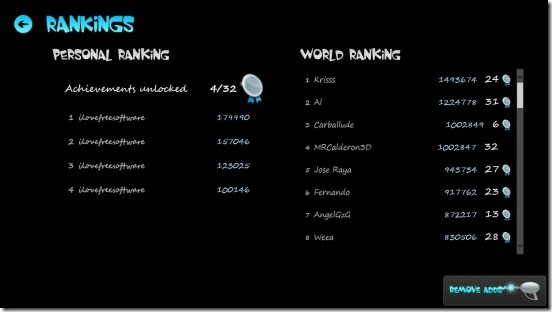 The Slunchies certainly is a well made Windows 8 shooting game app. It’s simple, and not too complicated with rules and sudden twists. At the same time it is also entertaining and fun. The sync between controls and actions in the game is also very good. But the thing that makes this game app a good Windows 8 game is it’s game play. All in all, a must try free game app.