Farmkill, is a free Windows 8 shooting game app. The game has a total of 28 levels, and all levels are completely free. Well, it’s a zombie killing game app, where the zombies will attack you from all the corners, trying to kill the three survivors. You have to kill those zombies with the help of guns, mines, bombs, and different funny but powerful artillery and farm animals. The game has one single location and that is a farm. You play as the three survivors hiding in the farm-house, and shoot the zombies to kill them. Kill all the zombies, and collect coins at the end of each level, and buy more awesome weapons and artillery to use in the next higher level. 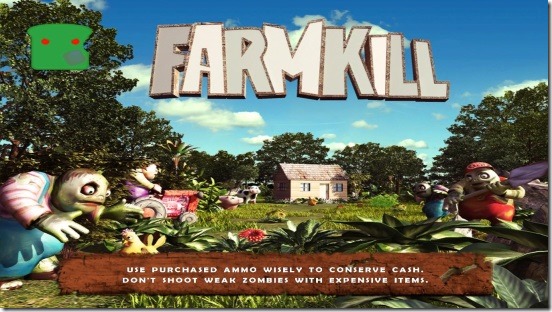 This Windows 8 shooting game app is pretty cool. The game has a good background story, that is: you are living in a zombie infected world, and you’ll play as the three survivors who have somehow escaped to a farm, and took shelter in a farm house, where an old country man, is helping you to kill the zombies, and supplies you artillery, guns, mutated farm animals and plants such as: Chicken Bomber, Stun flower, Mad cow etc. All the zombies attack only at night, so you have to survive the night by killing all the zombies and then collecting coins. 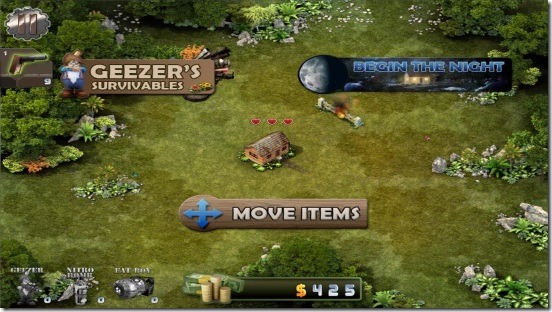 There is no doubt that this Windows 8 shooting game app has a really good game play. It has a really good level of difficulty. The game is at moderate difficulty at the initial levels, with just normal regular zombies walking and drooling, and slowly approaching the farm-house; where, you (the three survivors) are hiding and firing at zombies. And these zombies take just a single or two shots to die. But as the game level advances the game becomes harder, as you’ll start getting different zombies which are more aggressive and bigger. Some of them can even run and some take multiple shots to die. And as you advance in levels, it’s not only the zombies that’ll attack you but there’ll be other creatures as well, like big leaches. 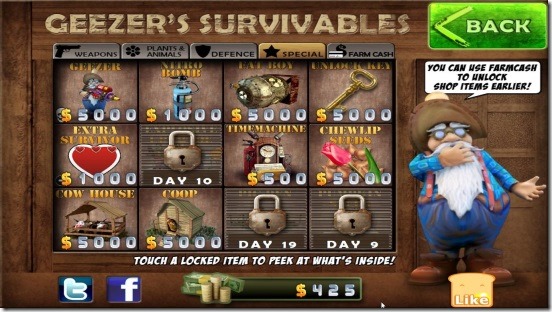 But in order to fight them all. The game provides you with different kick ass guns, ammo, fences, mines, gas bombs, nitro bomb, Fat Boy (which is more like a nuclear), time machines, and different mutated farm animals and plants. All of these are unlockable, and gets unlocked on successfully completing a specific level. And you can use the money that you collected at the end of each level to buy them and use them in next higher level. 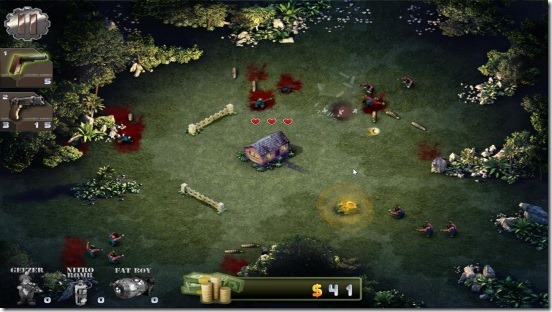 Like I mentioned above, there’s only one location in the game. And the farm-house, where you are hiding is at the center of the playing area. You’ll not see any players, but only the house. And you’ll not be running here and there. But just hiding and shooting. If any of the zombie manages to get inside your house, then one of the survivors die. And if you lose all three of them then, the game ends. However, you can restart the level again. A really cool thing that I liked in this Windows 8 shooting game app is, you can play any of the previously completed levels. So, if you are not able to complete a level, no matter how hard you try. Then simply play a lower level game, kill all zombies, make some good amount of money, buy some more bad ass guns and ammo, defend your house using laser fences, mines, mutated animals and plants, and some cool specials, like Fat Boy, Nitro Bomb, and Extra Survivor etc. And complete that harder level that you weren’t able to. 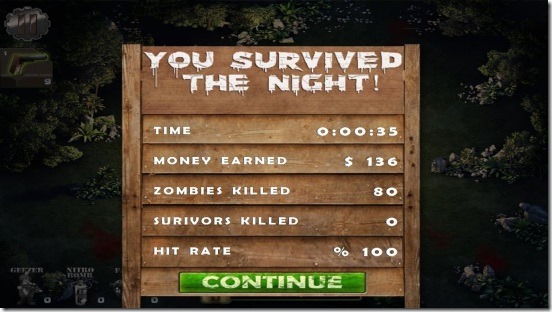 Another good thing about this Windows 8 shooting game app is you can not only place the items that can defend the house, but also move them to another place after completing each level. So, this Windows 8 shooting game is a combination of zombies, shooting, and strategy. Also the old man, is very helpful during the game, he guides throughout the game and gives you instruction to play the game.

If you are a big zombie fan, then you might also like playing this free Windows 8 Zombie Game App.

Farmkill, certainly is one good Windows 8 shooting game app present in the Game Category in Windows Store. It has great graphics, great gameplay, great music. There’s lot to do in this game app, besides just simply shooting at zombies. The game is a good combination of thought, graphics, animation, controls, and programming. And all of these collectively makes this Windows 8 shooting game app, a must try Windows 8 app.

Also check out these free Windows 8 shooting games, that gives you a puzzle to solve  in every single level: Bubble Star and Mortar Melon.