Bubble Star is a free Windows 8 Bubble Shooting Game App. This game is based on the classic bubble shooter game, in which you’ll get multiple marbles, and you have to shoot down all the marbles to get points. This Windows 8 game also has the same concept, but here, in place of marbles you have to shoot bubbles in the form of alien faces and asteroids, and get to the highest scores. There are a total of 6 level packs in the game, and each level pack further has multiple sub–levels (stages). Clear each level to unlock the next. 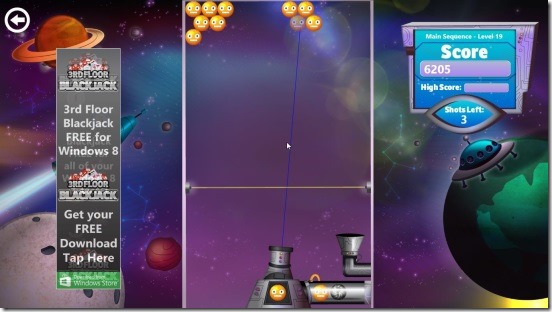 Shooting at the bubbles and popping them out in this Windows 8 bubble shooting game app was quite fun. I liked playing this Windows 8 game app. It is a good medium to kill some time, and give a little exercise to your brain. As the game includes both firing at a correct angle and solving the puzzle, so that you can form a group of 3 or more bubbles of same type. 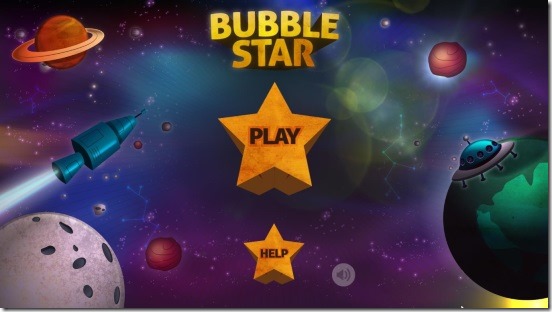 Each stage consists of a grid containing a group of cells, filled with random rows of different colored bubbles (aliens). The arrangement of bubbles varies depending on the complexity of the game. Also the game puts a limit on the number of shot misses. At the beginning stages it’s 3. And to make the game interesting you’ll get a laser light, which is actually a boundary; it is compulsory that the bubbles stay within the boundary. If any bubble crosses the boundary the game ends. 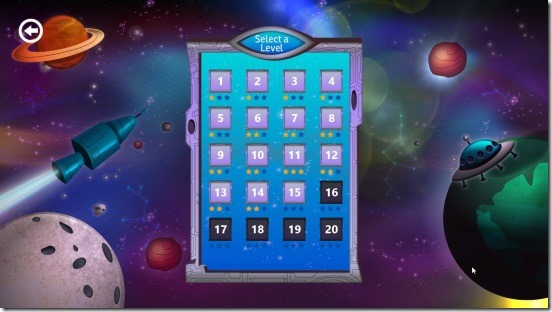 So, the task that you have to do is to clear the playing field by forming groups of 3 or more same looking bubbles. Clearing the bubbles helps you in getting to the highest score, possible. Also besides the alien bubbles, you’ll get asteroids bubbles as well. You can’t make the asteroids pop out of the screen but you can make them fall, by forming a valid group. The more the asteroids falls the more Astroids Bonuses you’ll get. Also finishing each stage quickly, awards you with more level bonus. There are multiple power-ups and bonuses that you can grab in the gameplay. 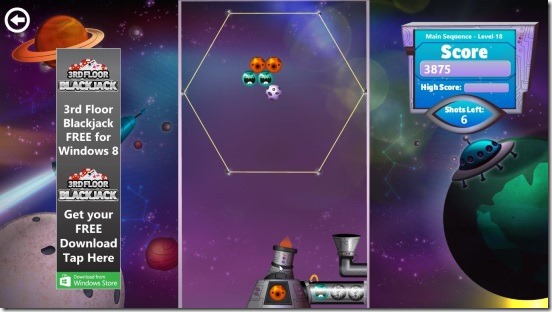 Following is a screen shot of a stage end result. 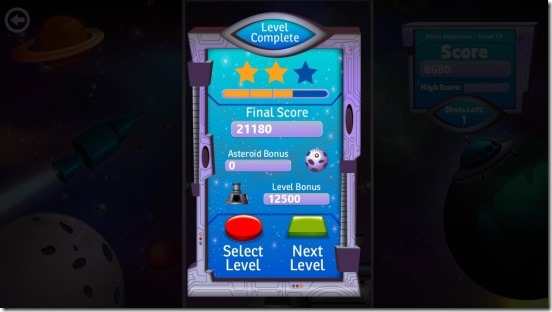 Bubble Star, indeed is a good Windows 8 bubble shooting game app. It’s completely functional, has got great looking graphics specially the alien faced bubbles. The animation are very smooth. It certainly is a challenging game. And a good news for the game addicts; the game works in offline mode, so you don’t need to be connected with the internet all the time. I liked the Hexagonal shooting mode, it’s more difficult than the Straight one, but it’s fun. All in all, Bubble Star is a good Windows 8 game app.