Paper Dash is a free adventure game app for Windows 8. In this game, you need to roam on roads to deliver a newspaper and collect money in return. It is an adventure game but with a very new concept. You will be given a bicycle with a bundle of newspaper. While riding the bicycle, throw the newspapers in front of the mailbox available near every house. Deliver the newspaper to at least 50 percent of mailboxes to clear the street (level). While delivering the paper, you need to avoid hitting various obstacles like cars parked on the street, else you will have to pay for the damage .

The game lets you choose a character from 16 different characters. Unlock 45 different levels of the game and enjoy the game. 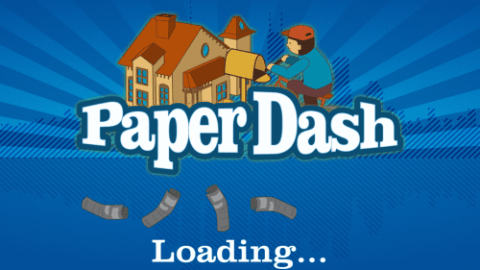 You can get free Paper Dash Game from Windows store by using the link given at the end of this review.

After launching the game, you will get different options: Play!, Player Profile, etc. Tap on ‘Play!’ button to start the game.

You will be redirected to a page from where you need to Select A City. After selecting a city, you need to select a Neighbourhood and Street to get started. 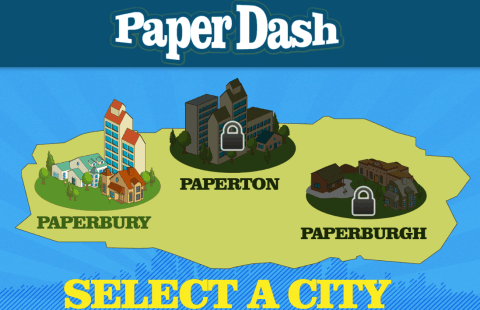 You will find yourself riding a bicycle on the selected street. 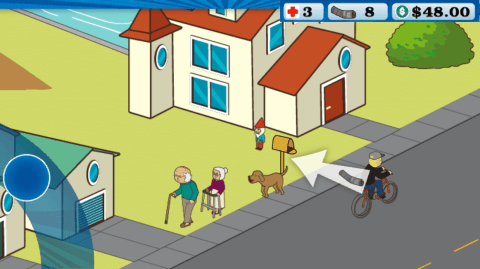 You need to deliver the newspaper to at least 50 percent of the mailboxes available on the street to clear the level. 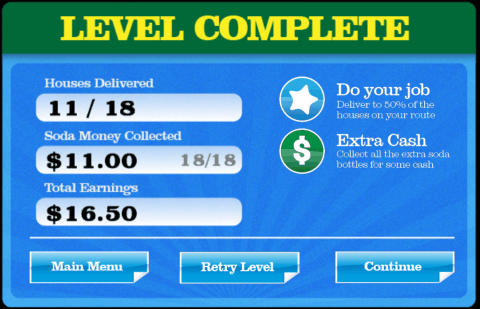 Well the game is not that easy. There will be some obstacles, like: dog, cat, barrier cone, gutter, football, etc. while riding. You need to avoid these obstacles while riding, else you will loose a chance. You will get only three chances to clear a level.

You can throw the newspaper on dogs and cats if they try to stop you.

If you are out of newspapers, then you will get some extra newspapers on the street. Collect them to throw.

You will also find some other items, like: soda cans, soda bottle, etc. Collect those to earn some extra money.

You can create your profile by tapping on Create Profile option on the home page of the game. It even lets you choose a character from six different characters, like: Tommy, Amy, Johnny, etc.

The game is controlled by Left arrow, Right arrow, Space key, and Mouse.

Some other similar types of game you may try Ragdoll Run, Fastball 2, and Sock Runner.

My Opinion About This Game:

Paper Dash is an adventure game with a new concept. The different levels and amazing sound effect manages to keep you busy for hours. The way you need to throw the newspaper and avoid obstacles makes the game interesting and challenging as well. I enjoyed this game a lot. You will surely enjoy this game.

Get this Windows 8 App from here.