Sock Runner, is a free Windows 8 running game app. It is a infinite running game app for Windows 8, infinite running in the sense that you have to keep running and get as far as possible, until you don’t fall off the platform. You’ll be playing as a sock! but a clean and cute sock. During your run you’ll meet multiple obstacles specially the gaps between the running platforms. You have to jump over them, and avoid falling. Plus you’ll also get enemies in the form of zombie socks, and different powers. It is one more addition to the good Windows 8 running game apps. 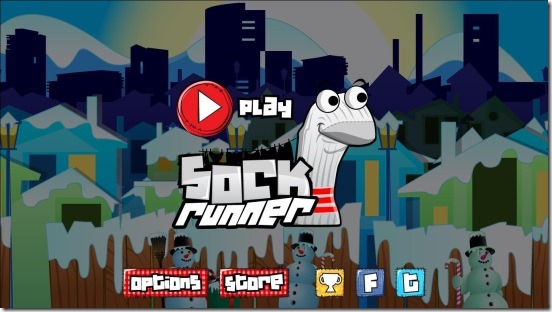 As a free runner game app, Sock Runner is a good game app. Like I mentioned above, the gameplay of this Windows 8 game app is flat straight and simple. All you have to do is keep jumping. A good thing about this Windows 8 running game app, that makes it a bit different from other running game app is: there are three types of jump. These can be achieved by pressing up keyboard arrow or with a mouse. The First one is small jump which can be achieved by pressing up keyboard arrow once. The second is a little longer jump, and can be achieved by pressing up keyboard arrow twice, and keeping the up arrow pressed, and the third in which the sock actually floats in the air for few seconds. For this type of jump, you have to grab the Triple jump power first; which can be grabbed during the run. Then only you can jump triple times the normal. 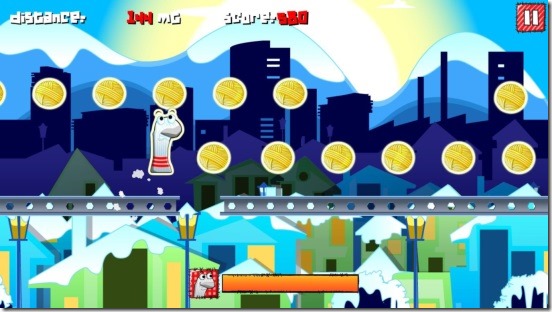 The character runs by itself, so, all you have to do is control the jumps. Like I mentioned above there will be gaps between the running platforms which are basically roofs. So you have to jump between these roofs, and collect as many gold ropeballs and clothespins as possible. These raises up your stamina, which ultimately helps you to jump. Plus you can also use these ropeballs to buy multiple powers. Also during your run you can grab powers. Powers basically help you to grab more ropeballs. My favorite power in this game includes: Magnet, Multiplier, and Triple Jump. 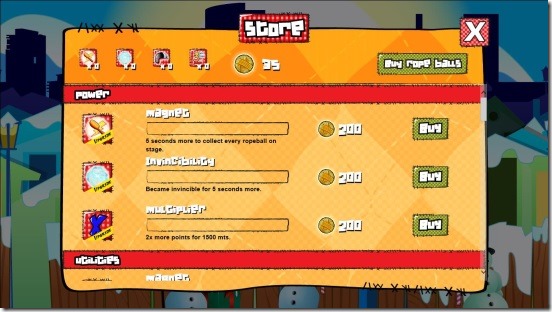 This Windows 8 running game app is in 2D, and the graphics, music, gameplay; all fall in the great row. Beware that the game difficulty increases as the distance that you covered increases. That is you’ll start getting more obstacles on your way, and your character starts running faster. So, don’t think the game is that easy. But still it’s fun and challenging.

At the end of every run, the game shows your stats, that is the number of ropeballs, clothspins, total zombie socks turned into good socks etc. 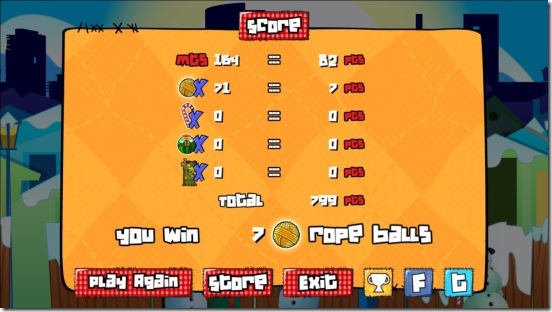 A good thing about this Windows 8 running game app is it shows the instructions of the game and controls at the begining of the game. Also if you want to see the objective you can pause the game, or click on the Cup icon in the Main Screen. Doing these shows you the objectives. 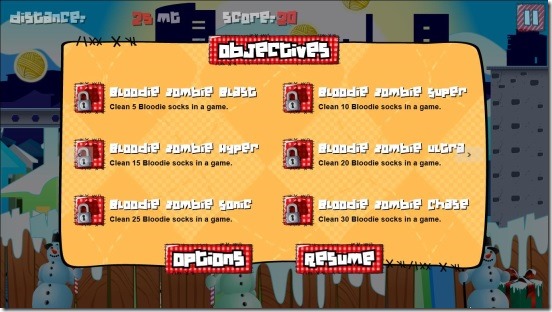 Also, if you liked this Windows 8 running game app, then do check these free similar games: Agent P Strikes Back, Run Cow Run, and Ragdoll Run.

Sock Runner, is a good Windows 8 running game app. It’s challenging but fun. Though, I couldn’t stay alive for long. Still I had fun. Above all, it runs in offline mode. That is you don’t need to be connected to internet to play the game. Which is quite a good news. Also, it is not that big in size. So you can download it quickly and easily. All in all, a good free Windows 8 app to try.