Pinnacle Audio Mixer is an audio mixer application for desktop which helps you to learn how to mix audio tracks or practice audio mixing for acquiring professional skills. With this free audio mixer you can load audio files with rhythms, effects and everything else that’s used for mixing music. Audio tracks can be arranged by dragging and dropping them on a linear editor where it’s possible to place them in layers so that they can be played simultaneously. 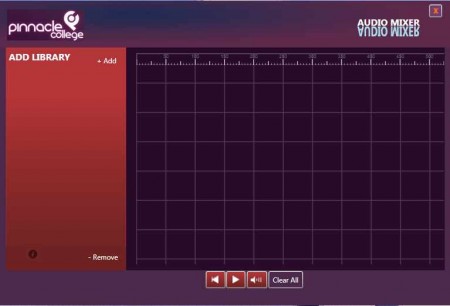 Check out some similar software reviewed by us like: FileLab Audio Editor, Jokosher, and MP3 Editor.

What you see in the image above is the default interface of Audio Mixer. On the right we have the main editing area where audio tracks can be placed and then mixed to create music. Left sidebar is where you will load the audio rhythm and effects library. Normally this type of mixing software is very complex to use, however, Pinnacle Audio Mixer let’s you easily get into the process of audio mixing by showing you the basics of audio mixing in a simple way.

Audio Mixer was developed by Pinnacle which is an educational institution that specializes in various audio related courses. There aren’t any kind of advanced effects that you can apply while learning how mix tracks with Audio Mixer, you’ll only be able to add effects with the audio track library that you use. Here’s are a few pointers to help you get started.

How to Mix Audio with Pinnacle Audio Mixer?

Before you’ll be able to do anything, any kind of mixing, you first have to load files into the library, you can do this by clicking on the Add button which can be seen in the top left corner of the window. Standard open window will appear, where you can select the files that you want imported. 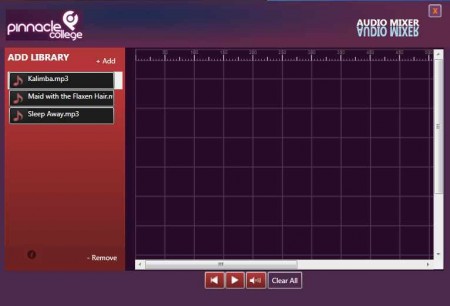 Selected audio files are gonna appear in the left sidebar. To add them on the editor which can be seen on the right side, simply drag and drop them from the list. 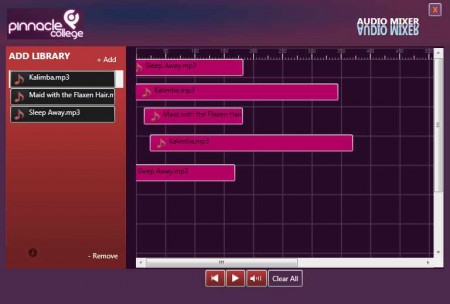 This is where the fun starts, each one of the audio files that you add will be represented with a rectangle. How large it will be depending on how long the audio track is. There are time indicators available at the top of the application. Mix them in the order that they have to be played and then hit the play button down below to hear the music that you’ve created.

As you can see Pinnacle Audio Mixer is a very simple learning utility which you can use to grasp the basics of audio mixing. Everything is very easily understandable, and you can use it and easily understand what this free audio mixer does even if you don’t have a lot of experience. Free download.