In the course of its evolution over the years, the Windows family of Operating systems has had many features added to it, and at the same time, some functionalities have gone the way of the dodo as well. However, there are some features that are so useful, that they have been part of every Windows version till now. And one of them is the Run dialog box. Easily accessible via a simple keyboard shortcut, it lets you open up everything from folders, to URLs, to system commands, all in a few keystrokes. But even with all that awesomeness, at times, the Run dialog box does feel a little too basic.

And probably this is the reason QRun, the theme of this write-up exists. A feature laden run dialog box alternative, QRun is a supercharged variant of the standard Run dialog box, having goodies like multi-line command history. What’s more, it has a handy button that can be used to quickly access system libraries, built-in commands, special folders, and much more. Sounds like something you can use? Head past the break to find out the details.

How To Use This Run Dialog Box Alternative With Shortcuts?

Step 1: Getting started with QRun is a fairly routine affair. Simply download the lightweight application from its homepage, and install it. Once installed, you can have QRun launch automatically. Here’s how it looks like: 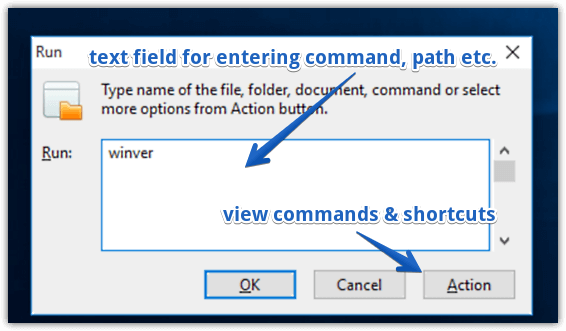 Pretty familiar, don’t you think? As seen above, QRun is nearly identical to the standard Run dialog box. There isn’t much, except for a text field for typing in folder paths, commands, and stuff like that. Other than that, there are the standard OK and Cancel buttons, and a special Action button that pops-out a menu filled with direct shortcuts to system commands, libraries, folders, and more.

Step 2: Just like the appearance, the working of QRun is also quite similar to that of the standard Run dialog box. All you have to do is type in the name (and path, if required) of the folder, system command, or web URL that you quickly need to access, and hit the OK button. However, the real fun is in the Action button. When you click on it, you get shortcuts to a whole bunch of important system locations and commands. Click the one you want, and its relevant path/command is automatically populated in the QRun. Hit OK, and you’re all ready to roll. Take a look at the screenshot below: 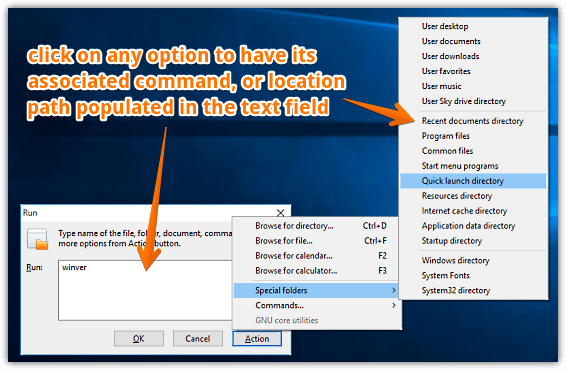 The Run command has always been an incredibly useful feature of Windows, and that’s still the case. However, if you’d like to have something that retains the Run dialog box’s simplicity, but adds a bunch of extra features into the mix as well, QRun is just what you need. Try it out, and shout out your thoughts in the comments section below.