Modern day computer hardware has come a long way since its early days. Nearly everything, from processors to disk drives to system memory (RAM) is now much faster and better, than it used to be. However, even if we never realize it during our regular day to day computer usage, disk drives don’t come anywhere close to RAM, when it comes to sheer speed. But what if you could temporarily use a part of your PC’s system memory as a supercharged disk drive? That’d be insane, right?

Turns out, you can, thanks to a little freeware called Miray RAM Drive. A light yet powerful RAM disk creator software, Miray RAM Drive lets you allocate a part of your computer’s RAM as a virtual hard disk on demand. This can come in really handy when you’re dealing with stuff that needs faster processing and disk access. Getting excited already? Read past the break, you’re going to love this.

How To Use This Free RAM Disk Creator Software?

In the simplest of words, a RAM disk (or RAM drive) is a chunk of system memory (also called RAM, hence the name), that the computer treats as if it were a regular hard disk drive. This is done via some complicated software trickery, and is primarily used when a temporary boost is required in terms of throughput, disk access speed, and things like that.

Step 1: Using Miray RAM drive to create a RAM disk is a walk in the park. Once you’ve downloaded the application from its homepage, and installed it, it can be controlled/accessed via the system tray icon. Now, to create a RAM disk, bring up Miray RAM drive’s main UI, comprised of nothing but a vertical slider with different presets for the amount of system memory that can be used as a virtual hard disk. The presets range from minimum (about 20 MB), to maximum (about 900 MB). Simply position the slider to the desired value, and click the Green button. 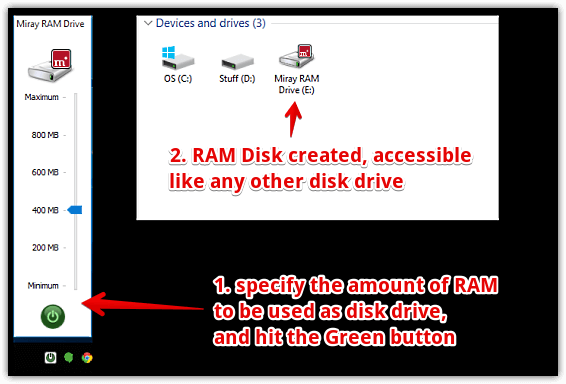 Step 2: That’s it. Miray RAM drive will now create a superfast RAM disk by allocating the specified amount of system memory to a separate virtual disk drive. This disk can be accessed like any other disk drive in the File Explorer. To delete the virtual disk drive, simply hit the Green power button once again. Here’s a screenshot: 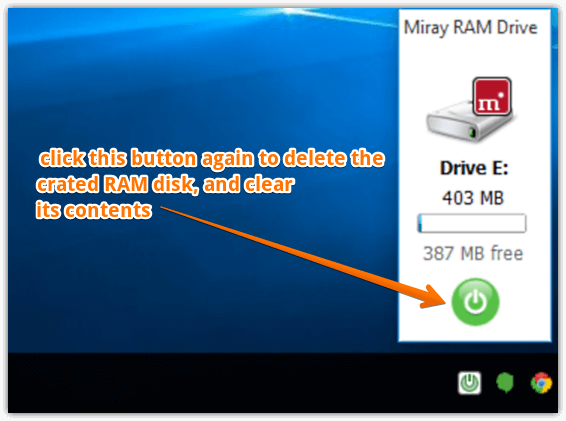 Creating a virtual RAM disk can be extremely useful in situations when you need a temporary performance boost for certain tasks. And as seen above, Miray RAM drive makes doing that child’s play. Give it a shot, and shout out your thoughts in the comments.