Collabtive is an open source groupware application which teams can use in order to work on projects. Official definition of groupware would be software which can help groups of people with common interests to work on various different projects, exchange ideas, make decisions, contribute with new findings and information, anything you can think of groupware software can do. 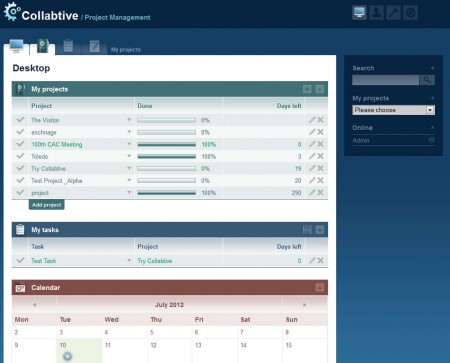 Another far more easier way to describe groupware software would be the following two words, project management, it’s basically the same thing. The principles are the same, people working together on projects. Image above is the default interface of the Collabtive project management system where you can see some of the useful features that you get with it. Desktop is the default location where you have overview of currently active projects, tasks that you need to do and also a calendar with your responsibilities marked on it. 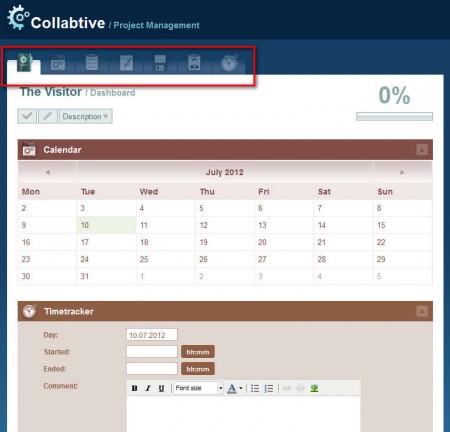 After the project is created, you will see what you see on the screen above. In the red rectangle is a list of different tools which you can use in order to control your project. These tools are:

Menu buttons are grayed out, perhaps a bit too much grayed out, which might confuse some people into thinking that they are not available. On the right upper corner there is a very useful status bar where you have a nice graphical representation of the projects completion in percentages.

The most important part of any project would be tasks, on the image above we can see a task added to the Tasklist. For each task it’s possible to add users and also assign the number of days in which you want the task completed. Before you can assign users they have to be added, which is done in the Users tab from the menu above. 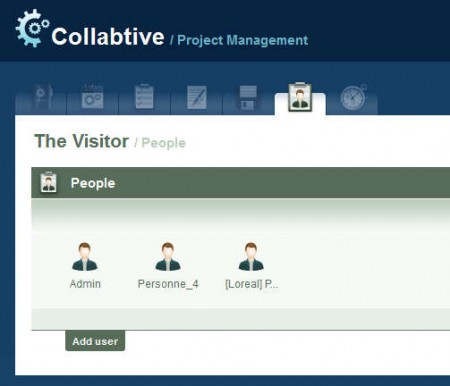 Next to these two things, there’s of course the rest of the very useful features that groupware applications like these have, the ability to add files, exchange messages and time tracking which can help out when it comes to completion of the project.

Collabtive is a very slick and easy to use project management software, which you can install on your companies server, or somewhere online, and have people from around the world working on projects important for you. It’s also great for independent teams working on for example open source projects. Collabtive is free, which makes it perfect for those looking to save money, which is always a good thing in these fickle economic times we’re in or for non-profit organizations, try it and see how it goes.