Imagen is a free multimedia player for Windows that lets you play audio video files of many popular formats and also allows to play animated gif. You can even fetch still images from playing video and can save it as bmp, jp2, jpeg, png, ras, rgb, tga, tiff, xmp, pcx etc. image format.

Imagen provides a nice interface where it also stores a list of recent files and folders. It also provides facility to view detailed information of a particular file and gives freedom to copy, move/rename, or delete media file directly using its interface. It is a bit different multimedia player than some other media players. 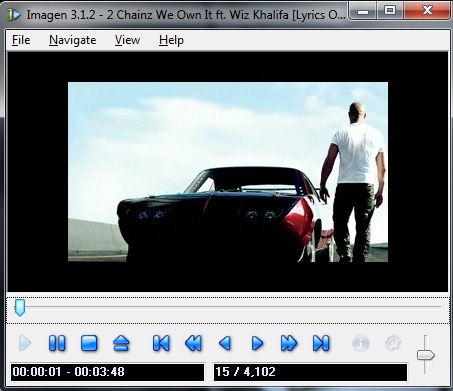 Imagen supports drag n drop feature to quickly play a media file. Its interface is quite similar to VLC media player. But unlike VLC media player, it doesn’t store media files to create playlist. Only a single file can be played at a time. However, you can use File menu to view recent files played by you and recent folders. More in this, you can also view information of a file and can rename, delete, or move media file using File menu. 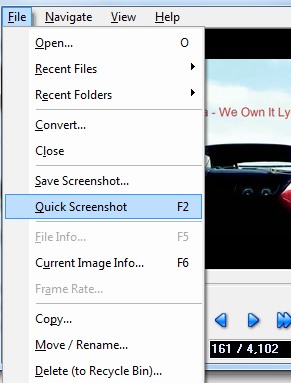 Apart from this, Imagen provides basic playback controls to open an audio or video file from PC to its interface, play a media file, stop, frame forward, frame backward playing media file etc. Here one thing that you might not like in Imagen is that you have to click on play button after adding an audio or video to play that media file. It doesn’t play media file automatically.

Note: Imagen also provides an option in File menu to convert a file using some other product named as VideoMach. If you want, you can download that product. Or else, you can try Blues Media Player and Easy-data Mediaplayer that contains inbuilt converter.

Key Features Present In Imagen are:

Imagen is a nice and completely free multimedia player which you can use to play popular audio video format files. In addition, it can be used to open still images as well as animated gif images. But playlist feature is missing with this media player which can be added to store favorite audio or video files at one place.