Aero Playlist player is a simple mp3 player that can play audio files, but no video files. You can always save the playlist of the current songs that you are playing, and then reload it whenever you want. The software has two players to play two songs at one time, one on the main player and another on the secondary player called “Jingle Player”.

The developers tried to make this software exclusive by adding this feature of secondary player to this free mp3 player, to play two songs at the same time. But seems to me as this attempt didn’t work as it should and they may have ended up adding a not so relevant to the purpose feature (continue reading the article and you will understand why I am disappointed). Besides that, the software is sized reasonably, just under 1 MB. There is a playlist saving and random song playing option.

So, the highlights of the software would be: the two simultaneous decks for playing two songs at a time, Random song playing option, Save the playlist and reload it later, and of course the small size of the software. These four features of this software may be the only USP to attract the users but may not be sufficient to impress them. I will also discuss about the features of later on, but for now let’s just listen some songs on Aero Playlist Player : )

How To Use Aero Playlist Player

Step 1: Unzip the file and open the application file and follow the installation steps. Open the player and start adding the songs to the playlist, or you can simply drag and drop the song to the playlist.

Step 2: The songs that you added will be played on the left deck; for adding the song on the right deck that says “jingle player” you will have to click on the “add” option provided there. You can learn more about the features of the “Jingle” player later in this article. 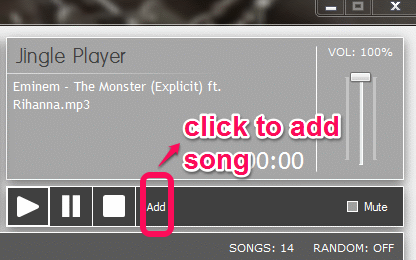 Note: The “Volume” and the “Mute” option provided in the screenshot above is for the main player.

Step 4: Click on the save option sandwiched between and save the playlist.

Thus you can enjoy your songs easily on this player by following the above steps.

Main Features of the Software:

Drawbacks of the Software

The biggest drawback of this software for me is that it does not play the video files, but again keeping in mind the small size of the software that drawback can be overlooked.

One more disappointment for me was that the secondary player lacked in feature. To quote the homepage of this software it says “ You can be the DJ with endless audio playlists”. As a DJ myself, I beg to differ with that. They could have added more features to this secondary “Jingle” player if they wanted it to serve the purpose right. I would rather prefer other DJ software.

Yes! I can overlook the above two drawbacks of this software, and still may prefer to use this software to play mp3 tracks simply because it is free and small in size. So try it yourself, though chances of liking this software can be a “may be”, but definitely it’s worth a try.