In this article, I have talked about 6 free media players that are less than 1 MB in size! Yep, you read that right; in this era of super huge media players, there are still many capable media players that happen to be super small. These audio players can play at least the MP3 format and some of them support a wider range of audio formats. The main use of such players could be to enjoy listening to music while you have your heavy RAM eating gaming or other sessions because these players put negligible weight on the CPU and the RAM. You can also run it on your super old PC that you still have lying around. If you happen to be an audiophile like me then I am sure you have explored a whole bunch of audio players that you’ve come across, before settling for one. I now prompt you to start this exploration again because these audio players, less than 1 MB in size, will catch your attention. 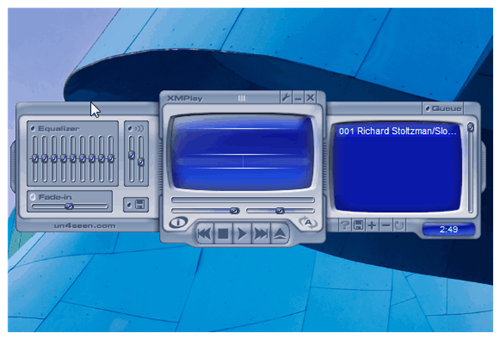 XM play is an old and experienced player among the audio players (pun intended). It was released in 1998 only supporting the XM format and since then it has been expanding it’s avenues. The current version of XM Play supports more than 17 audio formats and can play more using plugins. The size of it is astonishingly small at just around 360 KB. This audio player can also play Internet Radio. Like most of the bigger audio players, it has a 9 band equalizer, a reverb, visualizations, audio balance and you can save or load a playlist. If you ask how it looks then I would definitely say ‘smooth’. The interface is easy to navigate through as there is control bar on the bottom, equalizer on the left-hand side and the playlist on the right-hand side. If you find the current skin of the player to be lacking, then there are more from where that came from. The only feature that it lacks in comparison to other big shot audio players is that it doesn’t show Album Art. It’s hands down the best lightweight audio player I’ve come across. So, if you ask me, this is my favorite media player below 1 MB in size.

A detailed review of XM Play 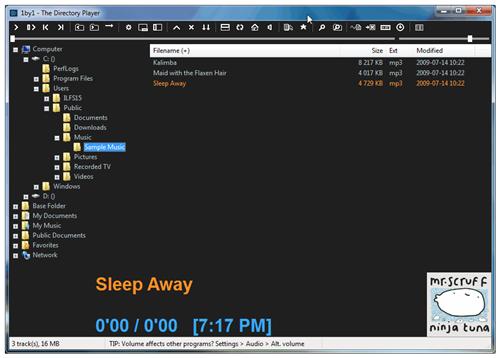 1by1 is a simple audio player that plays a broad range of audio files. This audio application comes in handy, because rather than setting up a playlist from a specific place, it plays audio files directly from the system directories and there is no need to make a playlist. The space on the hard drive it covers is less than 1 MB; its just around 200 KB in size.  It’s interface is easy to operate. The bar on the top consists of everything an audio player usually has which includes play, pause, next track, shuffle, etc. The application also supports an equalizer, but a 16 bit one with only 3 bands. It also possesses a 16-bit audio enhancer that can change the atmosphere of the song you’re listening to with an ample effort. One of the rare features that this  free audio player offers is its support for Album art. You can also download the Android version of this software which is also a really small file. The android version also supports audio webstream. I would say this application could have been better if the developer made the control bar more organized and placed it on the bottom because most of the users are used to that layout. The developers could have also developed skin support that some players in this range provide and this change can attract more users. But considering the size, that would be pushing the limits.

Windows Play is way different than the other players in its band. This is because it has no interface. You can only play MP3 files with this player. All you need to do is launch this application which shows itself as a system tray icon shown above and select an MP3 file and press Ctrl+P on your keyboard. The file plays the MP3 file instantaneously. This feature is because of its very little size of around 270 KB and the functionality. Since it doesn’t have an interface you’ll experience a lot of drawbacks and one of the main problems you’ll experience is not being able to play a list of MP3 files in one go. If the developer develops this application to enable playing a list of MP3 files in one go, then this player would work wonders.

A detailed review of Windows Play 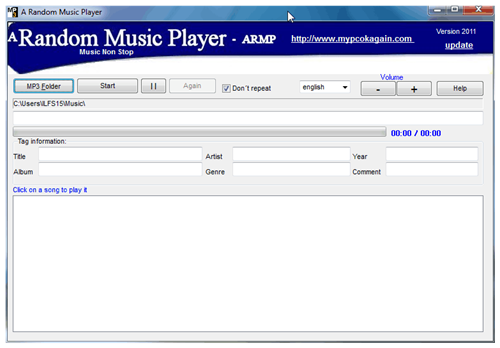 A Random Music Player is a simple MP3 player with a simple UI. It can play only MP3 files from a specific folder that you specify and supports USB storage. The player is a 670 KB small file. This MP3 software has less master controls which include play, pause, volume control and that is why it is fit for the users who do not care about seeking through the music. One of the things you don’t see in this category of players is the media information, which this  application displays  in text bars. My experience with this player was not a smooth one.The application has very few but annoying bugs which the  developer needs to resolve. The first problem I encountered was that the song that I would play in the list would vanish from the list. The second problem I ran into was this annoying dialog box being bombed on my screen that said “all the music has been played”. Overall this is potentially a good lightweight MP3 player if the bugs are resolved. 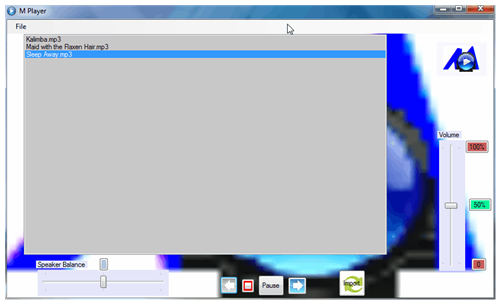 M Player is a lightweight MP3 player that has the necessary functionality that every mp3 playing software should have no matter how big or small. It packs a size of 314 KB  but provides a basic MP3 player without any unnecessary options. This is basically helpful for the less experienced users but might fail to impress the more experienced. The UI of this software I feel would fail to catch the audience’s attention in terms of looks since the skin of the player is an oversized and distorted image of the application icon. The functionality, however, is better than most of software in this category since it lets you play MP3 in a playlist and lets you jump to the previous or next MP3 file. I would definitely recommend this MP3 player to people who care more about purpose than appearance. 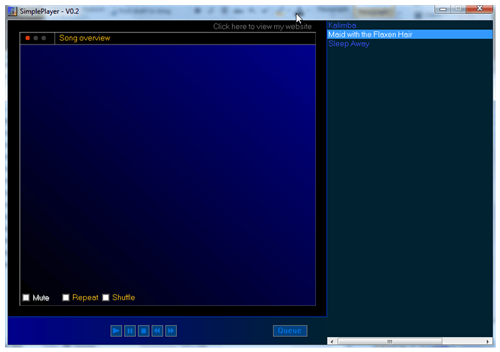 Simple Player seems to be a bit more refined and better version of 1by1 Player. The file barely takes up any space  on the hard drive which is around 750 KB and barely consumes memory.  The player looks quite good in a shade of black and blue with the basic control buttons on the bottom of the UI and a playlist on the right.The player also lets you repeat, shuffle and mute the playlist. This player supports only WMA, MP3 and WAV formats and can’t play any other extension. This is the only software in this set which can integrate Windows Media Playlist. All I can say about this software is that If the developers provide support to more playable audio extensions and make in-software volume controls then this one can prove to be a really good audio player.

The Audio player that I liked the most in this list is definitely XM Play. It has proved that even minuscule application can carry out all the features that its bigger competitors can carry. All of the other players were functioning smoothly except A Random Music Player, which seemed buggy. I decided to check how much memory these applications consume on the task manager and I was not surprised to find XM Play at the bottom which consumed less than 2 MB of RAM. M Player seemed to be consuming around 9 MB of memory which is the most in this list.

Why would you use such a player? Let me know in the comments below.