Buoyancy Playground offers you to test the buoyancy on objects of different mass, volume (of the object), and for different density of fluids. What I really like is that, you can see the fluid displaced by the object along with the forces that are acting on it.

Below I have posted a simulation clip in which you can see how the forces are changing when the density of the fluid is changed.

How To Use Buoyancy Playground For Buoyancy Simulation:

Buoyancy Playground is really very simple to use. All you have to do is run the software and you will have the user interface opened in your web browser. Well, in order to see the force of buoyancy, you can drop the object in the fluid and see the how much the fluid is displaced and how much the force is acting upon the object. 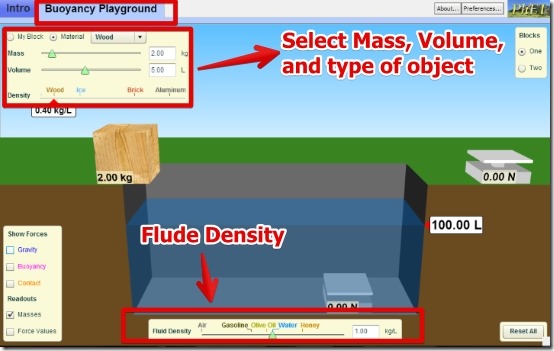 If you simply want to see just the force without getting into selecting density and all that stuff, you can select Intro Option.

Intro Option: In this option you can see how the force of buoyancy acts on the object. Also, you can test the buoyancy simulation for objects of same mass, volume, and density. Note that in this option, you get only Oil and Water as the fluids. 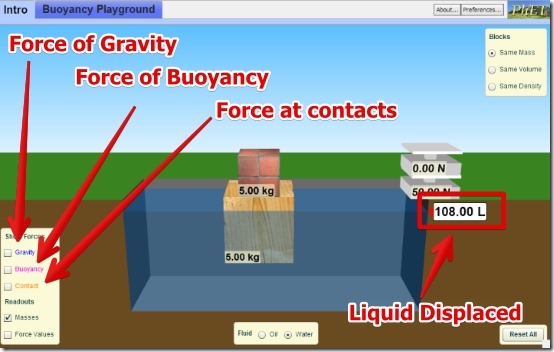 You can also try out other similar learning software such as Fluid pressure and flow and Generator.

Buoyancy Playground is really good for learning about buoyancy concepts. This buoyancy simulation answers many questions such as, why some objects float and why some objects sink in the fluid, why ships float on water even if they are made of solid steel, and many more similar questions. The simulation worked flawlessly and I was able to test it for different objects and see the forces on them. Overall, it’s a great tool for learning so I would recommend you to try it out.