Desktop iCalender is a free Windows calender widget which adds not only a calender, but also a to-do list and an event manager to your desktop. It can be used as a replacement for the default Windows calender, but with a much better functionality and a very attractive look. Calender has holiday and of-days indicators, events can help you keep track of important meetings and to-do list manager of important daily and weekly tasks that you need completed.

On the image above you can see the the three components that you get after installing Desktop iCalender. The three desktop enhancements that we mentioned come as separate widgets for your desktop. System tray icon is also available. From there you need to control various different aspects of this free Windows calender widget. Clicking on marked dates shows a pop-up which tells you what the holiday that’s celebrated on that day is. Events and Todos are perfect for boosting your productivity and making sure that you don’t forget appointments. 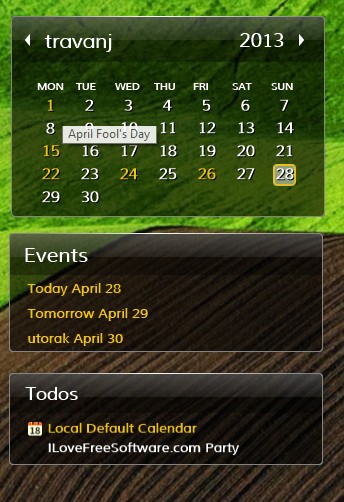 Default Windows calender doesn’t have nearly the kind of functionality that you get with Desktop iCalender. Resource usage isn’t very big, less than 20MB of RAM, which unless you’re using a very old PC shouldn’t be a problem for your hardware to handle. Here’s a few pointers to help you get started.

How to manage events, to-do lists and keep track of the date with Desktop iCalender free Windows calender widget

Widget’s should start working right away. They’re not connected to each other, which means that you can move them around individually. 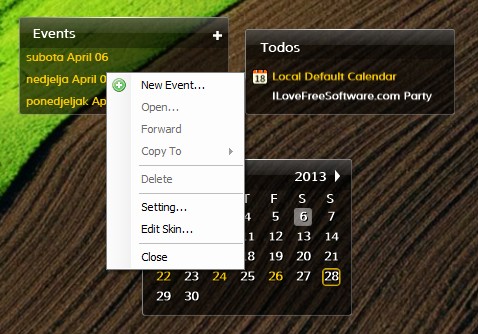 To add a new event, you can either right click on the Events widget to add event for the current date, or you can do the same thing for a date from the calender. You’ll be notified about events as they’re getting closer to the deadline. Do the same thing for tasks that you need to complete. 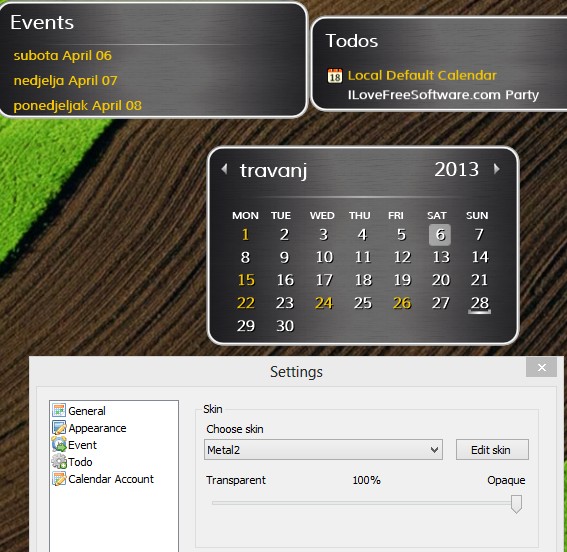 Right click on the system tray icon will give you an option to open up Settings, among other things. Settings allow you to change the skin, access Google Calender and much more. Don’t forget to confirm the changes made to see them applied.

Desktop iCalender is a very useful Windows calender widget, which not only has a very attractive appearance which is changeable (with skins), but also offers useful functionality, event manager and to-do list management. For those looking for more, there’s a paid version available which offers automatic synchronization of local calenders with Google Calender and more. If you’re looking for something to freshen up your desktop, this is the tool for you.