Other good options to organize open Windows on desktop are: AquaSnap, and WinSplit.

Usually, people tend to open many windows at the same time and in a specific order to meet their own needs but sadly many times a program might crash. When a software crash when you reopen it you will find in the last spot of your taskbar.

Considering that one may have several windows open having his/her program on the last spot of the taskbar can be really inconvenient.

How to Use TaskArrange to Arrange Buttons in Taskbar:

Using TaskArrange is really simple and it requires no installation. After downloading the zip file and uncompressing it simply launch the application. 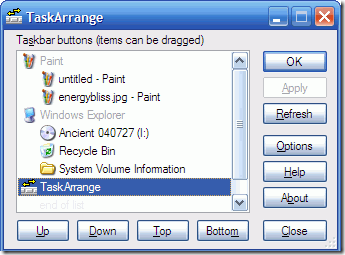 When the application properly opens you will see a really intuitive interface. In order to arrange your windows simply drag and drop them to the desired position.

When you’re done click apply for your actions to take effect. Also, one can go to options and choose to memorize the windows order so that you don’t have to keep organizing them over and over.