Here’s a list of 4 free meme maker software for Windows 10. Memes that I’m referring to here are internet memes using image macros. There are numerous types of memes for expressing different emotions and situations. Examples of the more popular ones would be the “Success Kid”, “Bad Luck Brian”, “Unpopular Opinion Puffin”, etc. Software that I found and included on the list makes it easy to create memes by offering templates, easy UI for adding captions, etc.

Free Meme Creator is a small and lightweight meme maker software, which works just fine on Windows 10. Because it’s lightweight, it doesn’t come with a large selection of meme templates that you can use. You’ll need to find the ones you want to use online, download them and then load them into Free Meme Creator by selecting “File >> New”.

With the meme template loaded you can switch over to the right-hand side and select the caption font type, color and size. All that’s left after that is to type out the captions you want to use to the “Caption” input field. “Insert New Caption” will add it to the image on the left. Added captions can be repositioned on the image via point-click/drag. Multiple captions can be added this way. Remove them by selecting the caption and clicking on the “Remove Selected” button. Memes can be exported as JPEG images. 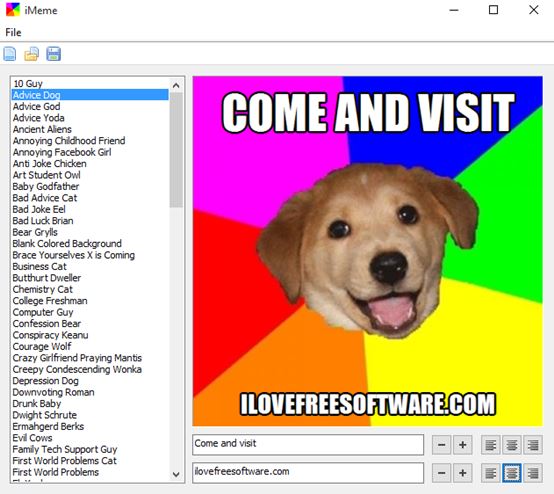 iMeme is a more advanced meme maker software for Windows 10 and Mac OS. The reason why I’m saying that it is advanced is because it comes with a large database of meme image templates. A little over 100 templates are available, as you can see from the screenshot above.

Template can be selected from the sidebar on the left. Image is loaded right away to the preview box on the right. Underneath the box are 2 text input fields, for 2 sets of captions. One of the captions is placed to the top of the image, while the other one down below. This is usual setup for memes. Font size is adjustable, as is the position of the text alignment (left, center, right). Finished memes can be saved as JPEG images.

Also have a look at 5 Meme Generator Apps For Android. 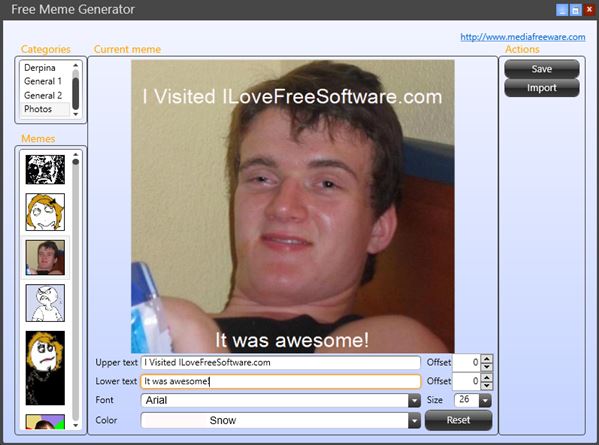 Free Meme Generator is in a lot of ways similar to iMeme, only it’s a bit rougher around the edges, if I have to be honest. By that I mean that I couldn’t find some of the characteristics that you’d come to expect from memes, like white font color with black outline.

Number of built-in meme templates is higher than the one found in iMeme, mostly because Free Meme Generator includes things like derp faces, rage faces, etc. Caption setup is similar to that found in previously mentioned meme maker software, but like I said, it leaves much to be desired. Two captions can be added, one to the top of the image, and another to the bottom of it. Their offset can be tweaked in pixels, and you can also tweak font type, color and size. Free Meme Generator supports JPEG, PNG, and BMP as output formats of the created memes. 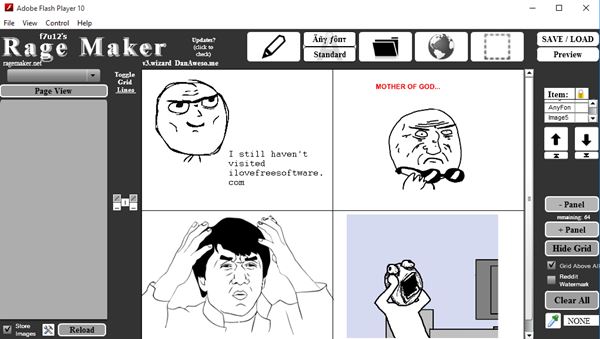 Rage Maker is a different type of meme maker software for Windows 10. It’s intended to be used as a rage comic creator, like you can see from the image above. By default it has 4 comic panels setup in a 2X2 grid, but this number can be changed using the +Panel and -Panel buttons in the right-hand side.

You could create a single image meme by removing all the panels but one. Application itself doesn’t come with any kind of meme templates, but packs of rage face templates can be downloaded from the website separately. Toolbox up top has a pen tool, text tool, ability to import images from the web and more. Sidebar on the right lets you control panels and the images you’ve added to the comic, like I already mentioned. When you’re done setting up the comic, click on the “Save” button in the top right corner of the application. Created memes and comics can be saved as PNGs to disk, or they can be uploaded directly to imgur/reddit, without using a separate imgur uploader for Windows 10.

Also have a look at 6 Websites to Read Chuck Norris Facts.

iMeme caught my interest the most, because it’s easy to use, has a built-in template of all the more popular memes and what you create using it really does look and feel like a meme. Other meme maker software for Windows 10 from the list has its advantages. Free Meme Maker is lightweight, but it’s lightweight at the cost of not having any templates of its own that you can use. Rage Maker is great for those that have longer stories to tell. Let me know what you think in the comments down below.