In this post, I will show you multiple ways to get Windows 11 Taskbar in Windows 10 with Start Menu. Here I will mention some free software which you can use to have Windows 11 look like Taskbar as well as stat menu in the center. There are already some popular paid tools put there such as Start11 and StartAllBack but I have found some of their free alternatives that you can use to do the same thing.

The following software can make the default Taskbar of Windows 10 look like Windows 11. Also, I have added 1 tool which can add the Windows 11 Taskbar and start menu and with some other additional features. With these software, you will be able to change the icon of Start button as well centered taskbar items. Not only that but you will be able to tweak the transparency of Taskbar as well.

With all the software below, I will also leave a simple guide to use and the configure them. You just have to do an initial configuration in all of these and then they will keep working on their own. 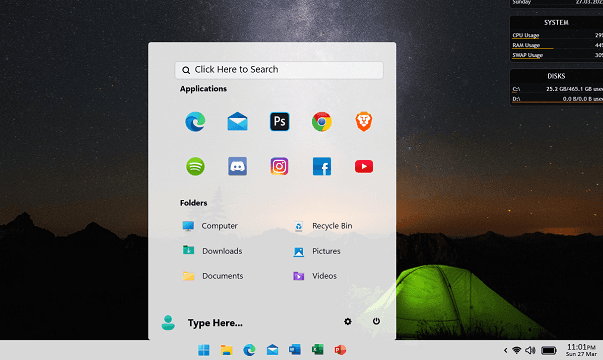 How to Get Windows 11 Taskbar in Windows 10 with Start Menu?

ExplorerPatcher is a free and open-source software to have a Windows 11 lookalike taskbar on Windows 10. Basically, it helps you tweak the original Windows 10 taskbar to make it look like Windows 11’s. It helps you center the taskbar items along with the Start button. It can even center the start menu and additionally add rounded corners to it as well.

It can center the Taskbar items as well as the Start menu. You only have to configure it once and then leave it on its own. It comes as a tiny app that you can install and use. And not just Windows 10 but you can use it in Windows 11 as well. One cool feature of this software is that it can permanently remove recommended section from Windows 11.

Here is how to use ExplorerPatcher to have Windows 11 like Taskbar and start menu.

Using ExplorerPatcher in this way, you can make the Taskbar look like Windows 11 as well the Start menu. This is probably the only tool which can set native Start menu in the center on Windows 10. And I hope later Windows update don’t break it in the future.

TaskbarX is another free and open source software you can use to have a Windows 11 like Taskbar in Windows 10. Here it also makes the changes in the primary Taskbar but it offers way more customization features than ExplorerPatcher. However, it is not really smooth and stable than ExplorerPatcher and hence it is on second number on my list.

Here are the steps involved to use TaskbarX to add Windows 11 like Start menu and Taskbar to Windows 10.

In this way, you can make use of this simple and powerful Taskbar customization tool on Windows 10. It can give you Windows 11’s Taskbar and Start menu in a few minutes. It starts automatically at Windows, so the changes you make will not be lost. If you want, then you can use and configure other customization options.

A lot of users use Rainmeter to customize their desktop. If you are using it on Windows 10 PC already then there is a Windows 11 Taskbar skin that you can use. The skin basically mimics the Window 11 Taskbar, Start menu, and then system tray along with Wi-Fi and battery icons.

This is an open-source skin and just released a few days ago. For now, there are some glitches in it, but it does add a Windows 11 look like Taskbar to Windows 10.

However, you have to note that the Taskbar that it adds is a secondary one. No changes will be made to your original Windows 10 Taskbar. And hence, if you want to use it then you will have to keep the primary taskbar hidden.

Follow these steps below to add a Windows 11 Taskbar in Windows 10 using Rainmeter. I am assuming that you have Rainmeter already installed.

This way, you can make use of Rainmeter to add a Windows 11 like Taskbar and Star menu in Windows 11. The process is very simple straightforward. This is open source and is in active development., Apart from the above look and feel, there are 2 more Taskbar styles that you can apply if you want to.

For free, I could only find these amazing free software that you can use to add Windows 11 like Taskbar and Start menu in Windows 10. They all work perfectly and based on which one you liked more, you can use that one.