Here’s a list of 5 open in incognito extensions for Chrome which you can use to automatically open up specific websites in incognito window in Chrome, to convert existing tabs into incognito windows and to make it even more easier to open up tabs in incognito by adding various different triggers and filters. Sometimes we think that we’re in an incognito window and start browsing “incognito worthy” websites by accident. All this activity is tracked and it might come haunt us at one point or another.

Following extensions help you avoid that. 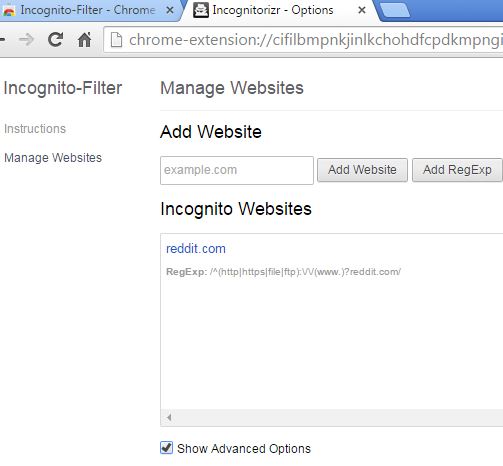 Incognito-Filter is a great open in incognito extension for Chrome, open in incognito automizer to be more precise. It allows you to setup domain filters using domain names or regular expressions. Domains added to the filter are going to automatically be opened inside incognito windows.

You can see how this extension works on the image above. Start by opening up its settings and adding the websites that you want opened in stealth to the list. You will have to click on the “Advanced” check mark to activate regular expressions. After a domain has been added to the list, every time that it’s opened, either directly (by typing the domain into the address field) or indirectly (by clicking on a link), it’s going to open in incognito mode. 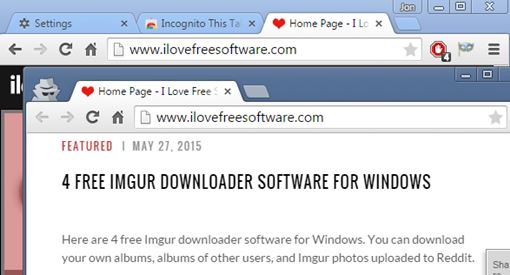 Incognito-Filter is great at automating the process of opening websites in incognito, but what do you do when you want to open up a currently open website in incognito? That’s where Incognito This Tab comes in handy.

It’s going to add a top right corner icon and a right click context menu option for opening the currently active tab in incognito, so that you can continue surfing the website with your privacy intact. You don’t have to configure anything, just click on the icon or right click and select the “Incognito This Tab” option to open the current website in incognito.

Get Incognito This Tab.

Also, have a look at Automatically Switch to Incognito Mode while Opening Some Websites: Ghost Incognito. 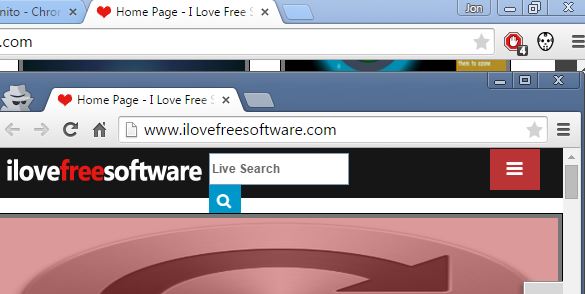 Open In Incognito is basically the same open in incognito extension as Incognito This Tab.

You get a top right corner icon with the help of which you can easily open up websites in currently active tabs in incognito mode and that’s about it.

Get Open In Incognito. 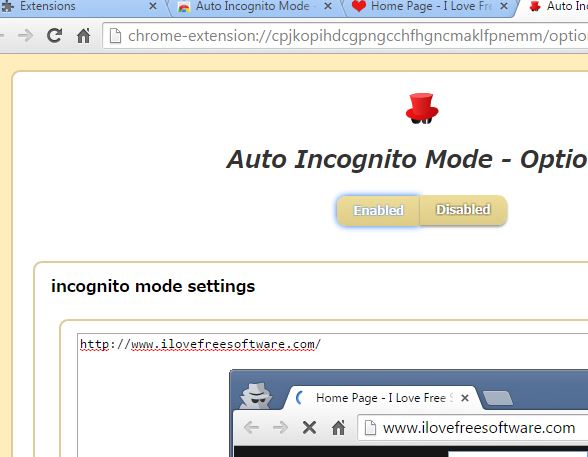 Auto Incognito Mode works just like Incognito-Filter. It filters the domains and automatically opens up in incognito mode the ones you put on its list.

It’s a great alternative if one of the other open in incognito extensions that I covered are too simplistic for you. Regular expressions are also supported if you need a more varied selection of websites opened in incognito.

Also, have a look at How To Make a Chrome Extension Run in Incognito Mode Only. 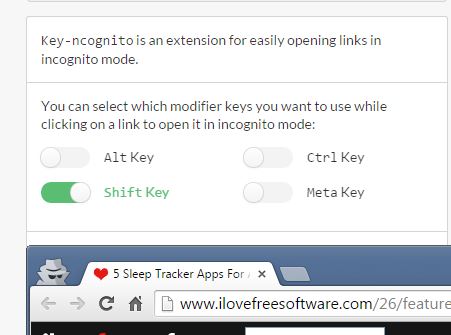 Key-ncognito is going to be a life saver for everyone who hates mouse clicks. What it allows is attaching configurable keyboard shortcuts for opening links in incognito.

Open up the extension settings to tweak the keyboard shortcut and also the way in which you want to open up the link, in a new window or if you want to reuse an open window.

I like the Auto Incognito Mode and Incognito Filter because they can automatically open up websites in incognito windows, based on previously set rules. Key-ncognito is also great because it lets you choose setup keyboard shortcuts for opening links in incognito. Others are also not that bad, but start with these three. They have everything you’ll ever need when it comes to opening websites in incognito in Chrome.