And by the way, you should also see what this app has in store for all you multitasking enthusiasts. Just sayin’! 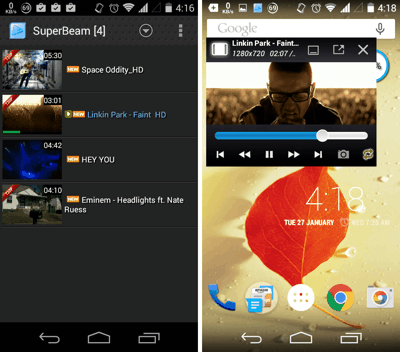 GPlayer is one Video Player which is specifically built for handling your Multitasking needs. G Player is one of the most popular and feature-rich offerings when it comes to floating video playback. Once you open it, you will see all your video files listed there, or you can switch to Folder view, if you’d prefer that. Switching between Fullscreen and floating video is one of the most seamless here — you just have to double-tap on the video, and it will switch to floating mode and vice versa. Even in Floating mode, you will have numerous options to choose from, a lot similar to the way they are in a full-fledged video player! Various directional swipes on the Video can be used to adjust the volume, brightness or seek to particular part of the video. The video window can be easily resized as well just by holding and dragging on the lower right corner of the pop-up. 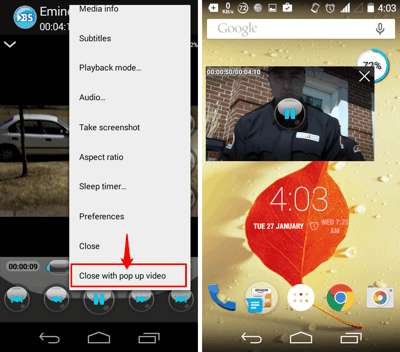 BS Player is one of the most feature-rich Video Players, and that’s for a reason. It can play almost any video that you throw at it, and do it in style too! The user interface is simple to understand as well. And while the Floating Window mode is not so obvious to notice from the Playback screen as there is no visible icon; you can switch to it easily just by tapping on the menu button and selecting “Close with pop up video” as is shown in the first screenshot above. The Floating Video Player itself doesn’t have too many options to talk about, but is extremely intuitive. You can drag-‘n-drop to move it around easily, and resize by simply pinching-in and out (the way you zoom in and out in images, browsers etc.). Want to switch back to fullscreen video? Just double tap on the Floating window and the Player will switch to fullscreen video mode. 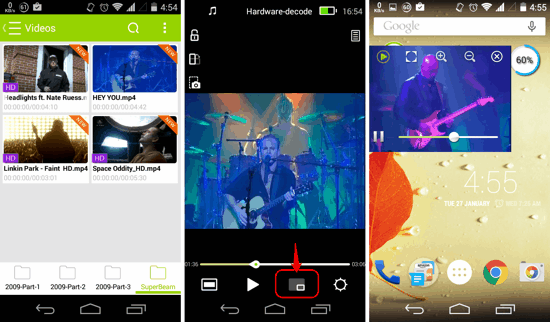 MoboPlayer is another popular name for Android users. And while the old version itself was extremely successful, the interface became even more intuitive after the complete overhaul in version 2. MoboPlayer has had the floating player functionality since quite a long while back and it was in fact among the first Video Players to implement it. You can open any currently played video in floating mode just by tapping the Pop-up icon as is shown in the second screenshot above. The floating window for a video can be moved around and its size can be adjusted by tapping on the magnify icons. The mode is extremely stable and hardly stutters. The only gripe some users might have is the fact that you can’t really have a freehand over the floating window size, and have to rely on the tap buttons. 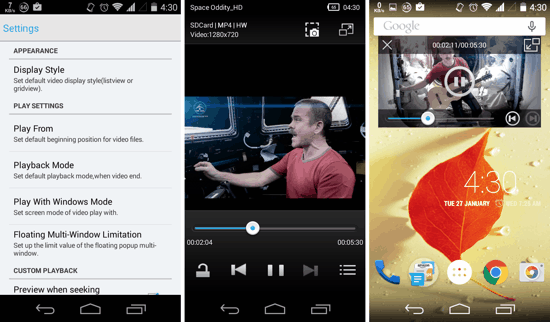 Okay, so what if someone isn’t even content with a floating window for his videos? Well, the answer to that is ‘Multiple windows’! Yep, PlayerX Video Player allows you to play multiple videos in multiple floating windows. Once you start the app, all you have to do is going to in-app Settings and change the default Floating Multi-Window Limitation — and you can choose to have a maximum of 4 Floating Video Player windows open at the same time. While this may sound like an overkill, for some users, this feature might be great for showing-off to friends! 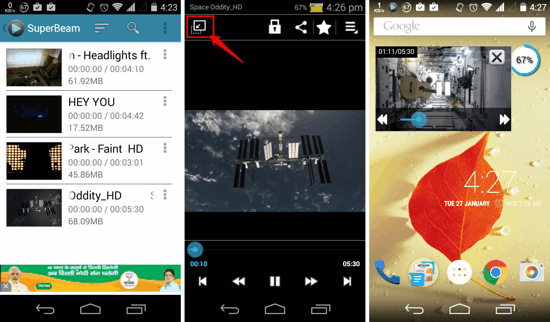 SR Player has a simple and easy to use interface, and support for background as well as floating window playback. The floating window mode of this Video Player follows the same simplistic implementation of its fullscreen player. But you won’t be getting any extra options with the floating video player except for Playback options and moving it around. Yep, you got me right — it seems that you can resize the floating window, but either the gesture is NOT intuitive at all, or maybe I am the only one who could not figure out how to do it. You can give it a try and tell me what I might be doing wrong.

So that concludes my list of 5 Free Floating Video Players for Android. Did I miss a good option that you use? No worries, you can always share your views in the comments section below.