Microsoft Arrow Launcher for Android (BETA) is yet another application, like Next Lock Screen, from Microsoft for Android users. It is a simple and elegant Android launcher which focuses on providing you with the apps and things which you use frequently on your device. It is different from other Android launchers in the way that it doesn’t provide any customization feature except changing the wallpaper. In short, it is the launcher which you need to install, set as default launcher, and then forget about it. It will do the rest itself. 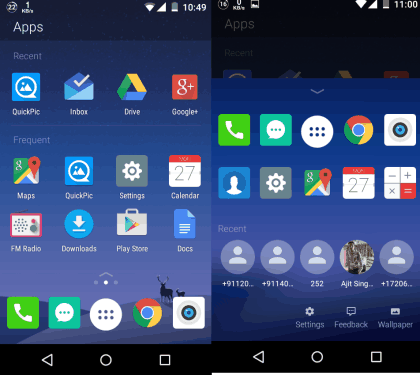 The Microsoft Arrow Launcher for Android is in Private Beta phase as of now. It means you will have to request an invite for installing and using it. You can request for the invite by joining their Google+ community. When you have received the invitation, install the launcher and set it as the default launcher for your device. Once you have done that, you will see the home screen of the launcher as shown in the screenshot below. 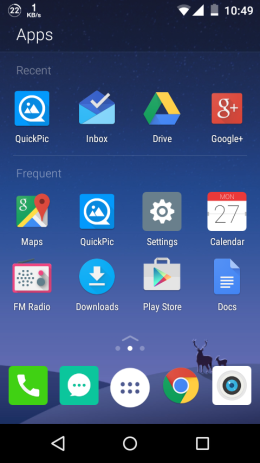 Here, you can see the listing of your Recently and Frequently used apps. The Frequently used apps section consists of 3 rows, the third one is hidden in the screenshot. You will need to scroll to see it. These listings are dynamic and they will keep on changing as you will use the device. However, you can choose to remove any of the apps from the listing by tapping and holding on it and swiping it upwards. Do remember that after removing an app, its position will be replaced by some other app.

It was the main screen of the launcher, but there are two more screens. One on the left and other on the right. The screen on the left shows you the list of Recently and Frequently contacted people. Tapping on any contact name will give you quick options to call, text, and email that contact. 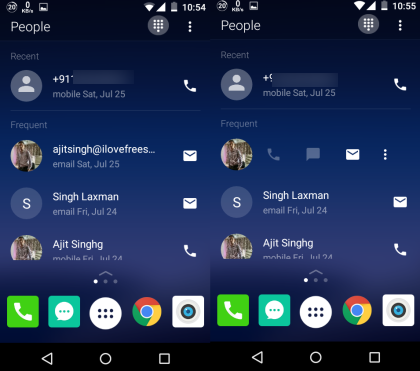 As for the screen on the right, it lets you add notes and reminders. You can add notes by typing in the text field at the top and for setting the reminder, tap on the note to get the bell icon. Tapping on the bell icon will give you the options for adding the date and time to set the reminder. The cross icon is for deleting the note/reminder and star icon is for marking its priority higher than others. 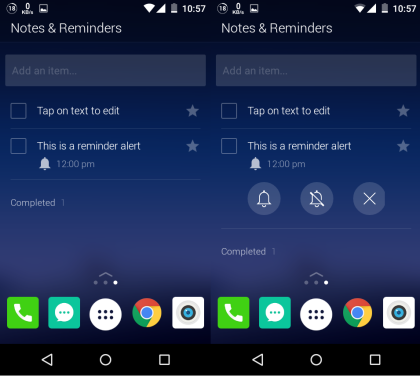 Apart from the 3 screens, there is also an option for adding quick shortcuts to the apps for saving your time of going to the app drawer again and again. You can access the shortcuts by swiping upwards from any of the three screens. Here, you will see the shortcuts to 9 apps chosen by launcher but you can delete and add any app as per your choice. 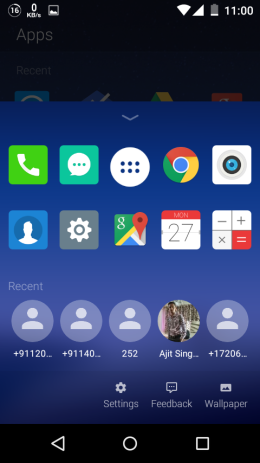 To add any app to as the shortcut, tap on the App drawer icon (big White colored icon) to get the app drawer. Now, simply drag the app icon from the app drawer to the interface where the shortcuts reside. As for the app drawer, you can see that it’s a common drawer resembling the one in upcoming Android M and many other launchers. 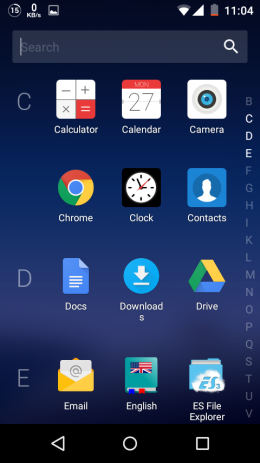 You may also like: Smallest Android Launcher with App Usage Tracker.

Microsoft Arrow Launcher for Android is a good enough launcher for those who are focused only on the working of the launcher and not in customizing the launchers. It makes things really easy for you by providing a list of recently and frequently used apps and things right in front of view. However, it is in Beta phase so I can’t really say whether it will remain the same until its public release. It might happen that Microsoft adds a couple of things to it. As of now, it is definitely worth trying out.

Request your Microsoft Arrow Launcher for Android invite from their Google+ community.