Soluto, a freeware, is perfect for PC users who often get frustrated, ideally sitting in front of their unresponsive and sluggish PCs. It is an excellent technology which counters the startup issues and makes PC boot faster and more efficiently.

During system boot-up a lot many other programs also get loaded simultaneously. This heavy load, during the start-up process, results in low efficiency of the system and thus a slow and unresponsive PC.

Soluto is a lot different than other startup managers like StartupLite, nCleaner, and Glary Utilities. These programs rely on your intelligence to remove unnecessary programs from bootup process, but they do not give any hint around which program is slowing down the boot process.

Soluto analyzes the time taken by a system to boot up. Not only does it show the time results, it also displays the various programs and time consumed by them during start up. 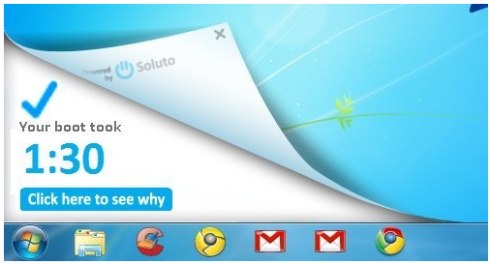 Soluto groups these programs into three categories:
• No-brainer – Programs that should be removed
• Potentially removable – as the name suggests, programs which need inspection before removal
• Required – programs which are mandatory during start up and cannot be removed

After identifying and grouping the programs users can make use of the action recommendations offered by Soluto.

A set of two actions are available:
• Pause – pauses programs but can be restored
• Delay – Loads the program after boot up

If you believe in the “Majority rule” then Soluto has a graphical display, a pie chart, which projects the action the majority went with.

Soluto can also keep a check on programs which can possibly reduce the system efficiency while the system is up and running.

Future plans:
Soluto’s tech team is working hard on the PC Genome. It is a database which will grow with the usage of Soluto application. This knowledge store will be centralized and made available to the community.