In this article, you will read about the newest feature of Microsoft Teams that lets your view 9 participants simultaneously in the Teams Meeting.

Microsoft has been coming up with new features in the Teams interface for quite sometime now. You can see feature they have come up with, such as 3×3 video view during the Teams Meet, meaning showing up to nine video streams at once.

This new feature allows a maximum of 9 participants on a single screen which is an increase from 4 participants originally supported. If you want to access this feature, you need not do anything, you just have to continue using Teams application as per your regular use.

How to view 9 participants simultaneously in Microsoft Teams?

Microsoft Teams has been rolling out new features to add to the collaborative work and enhancing productivity during the work from home scenario. Its new feature is a 3X3 grid view during the video meeting. Let us see how you can view upto 9 participants simultaneously online on your next group video call in Microsoft Teams.

For this, you won’t have to do anything but simply have to witness this new feature when you’ll add more than 4 or 5 people in the group video call or Team meeting. As you continue to add more people, Teams Application will simultaneously provide you with the view of the contacts whose video stream is on.

If there are less than 9 people in the Team meeting, the video grid of the attendees will adjust itself randomly over your screen and will continue to add more video stream screen as you add more people. 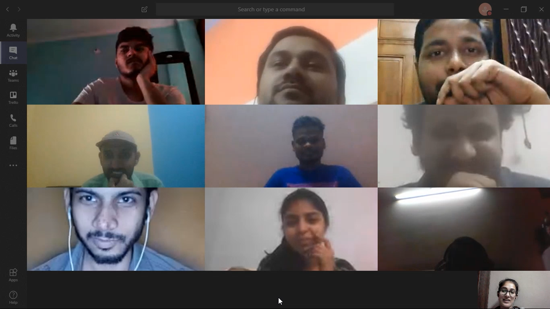 If there are more than 9 people in the meeting, you could still hear them. However, one of the inactive video streams from the 9 video screen will be replaced by the active ones to keep the 3X3 view grid in place.

This new 3X3 feature brings you the fresh video meeting experience over the Teams application. To enhance this feature, there is also one Raise-hand feature rolled out so that the participants do not have to interrupt the ongoing video call discussion but simply click on this feature if they have anything to say.