Here is a list of 5 best free Android apps to block access to apps for a specific time.

Using these apps, you’ll be able to block any pre-installed or downloaded apps on your Android device for a certain period of time. Doing so, you can focus and concentrate more on your work instead of playing your favorite checker games, scrabble games, matching games, or browsing addictive apps like Facebook, Instagram, Twitter, etc.

Suppose you’re obsessive about apps like Facebook, WhatsApp, and Instagram, but also have some work which you need to complete desperately. All things considered, in that case, you can try out all these apps to restrict access to these applications and at last concentrate on your work without distraction. 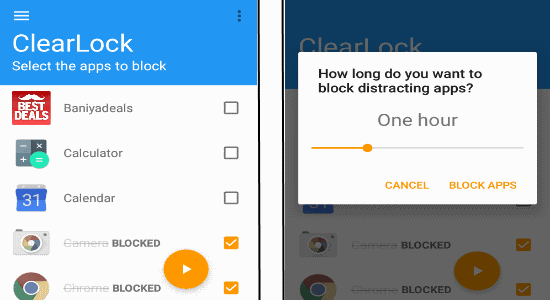 ClearLock is definitely one of the best apps that allow you to block or restrict access to all the system as well as downloaded apps. If you’ve some important work, but you’re unable to concentrate because of the distracting apps or games on your phone, then ClearLock can help you move your focus back to work by blocking access to the apps. For this, all you need to do is choose apps which you want to block and set up a specific time period. After that, the app will block your access to the selected apps and you won’t be able to use them until the specified time is up.

You can set the time interval for blocking apps from the range of 10 minutes to 12 hours. Once the timer is activated, there is no way using which you can access those apps until you decide to either uninstall this app or reboot your device. Each time you try to launch any of the blocked apps, the app will be closed automatically displaying the message “The App is Closed by ClearLock”. 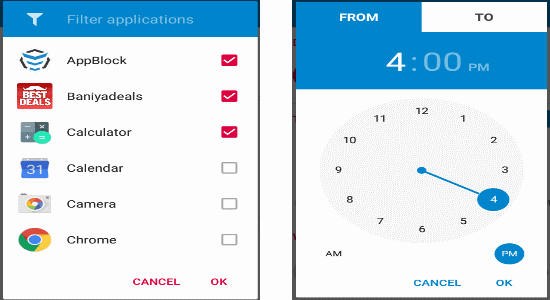 AppBlock is another useful app for Android to stay focussed on your work by temporarily blocking access to distracting apps. Sometimes, you might not be able to concentrate on work because of your favorite apps on your phone. But not anymore, as you can use this free app to temporarily block all the apps to which you’re addicted badly. To block access to apps, all you need is to create a profile, select whatever apps you want to block, and then set the time period.

The best part of this app is that apart from setting a specific time period for blocking apps, you can also configure days on which you want to block the apps automatically. Unlike ClearLock, you can simply open the app and navigate to the created profile and unlock it in order to access the apps. Additionally, it also allows you to disable notifications from different apps on your Android phone. 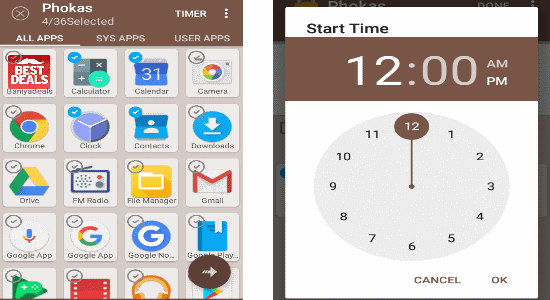 You can also use Phokas Self Control App to block access to apps which might distract you while working on important matters. The app interface is super simple and you can simply select apps and set the time duration for blocking them. Similar to AppBlock, this one also has the option to set the app block timer for any day of the week you want. Doing so, the apps will be blocked repeatedly at the assigned time duration on the selected days. The only catch is that it only allows you to block the apps for up to 1 hour.

You can either select pre-installed apps or the apps and games which you’ve downloaded manually. This app will make sure that you won’t get access to all the apps which you block on your phone and ultimately help you with your important work. If you reboot your phone, then the timer will be paused automatically and you can access your apps. 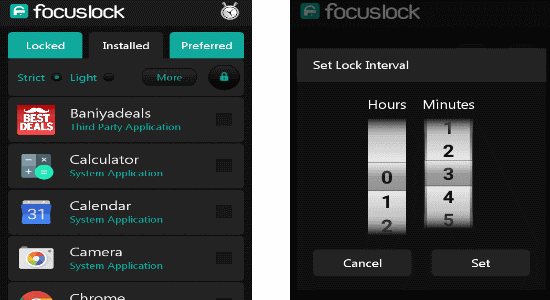 Focus Lock is a simple Android app which can assist you to concentrate on work that matters by blocking the apps which might resist you to concentrate. To do this, you simply have to select apps which you want to block temporarily and enable the “Lock” icon associated with each app . After that, set a time interval for when the apps will be unblocked and become accessible. That’s it, you can now go ahead and do your work without getting magnetized to your phone for accessing all the blocked apps.

All the installed apps on your phone will be listed and you can select each one one them to block the access. The best part of this app is that whenever you’ll try to open any of the blocked apps, it will ask you to type a huge phrase in the input field to open this app and then unblock the apps manually. If you’re so desperate to access the apps, then go ahead and type the phrase as no one is stopping you from that. Another useful feature of this app is that you can set a short break time during which you can access your favorite blocked apps. 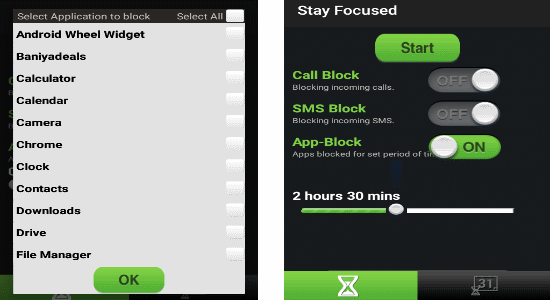 The last app in my list is Stay Focussed, which is created to help users (who get easily distracted by their Android phone) concentrate more on work. Similar to other apps on this list, Stay Focussed also allows you to block access to apps, which might distract you while working on some important matters. To restrict access or block distracting apps, all you got to do is select apps from the list, drag the slider to set the lock time period, and hit the “Start” button.

After that, the app will become inaccessible until the timer runs out. You can also create profiles for repeating the timers on any day of the week you want. Another great feature of this app is that it lets you save your block profile such that you can simply open the app and activate the app block timer whenever you want. Apart from blocking apps, it also has the option to block SMS and incoming calls.

If you’re having trouble to concentrate and focus on your important work due to your favorite apps on your phone, then you can go ahead and use any one of these apps listed in this post to block those apps for a specific period of time. Doing so, you will be able to focus more on your work instead of browsing apps or playing games.