Here is a list of 5 Best Free Checkers Game Apps for Android. These apps let you play Checkers (also called Draughts) right on your Android device in solo, or Multiplayer modes. Checkers is one of the most popular games around the globe and is known by different names in some countries. But the popularity of this game is undeniable. And, if those long work hours are doing you no favors in terms of entertainment, maybe a game or two of Checkers on your Android device can come in handy! While most of these Checkers Games have both, Single as well as MultiPlayer option, others are fairly simple and just let you enjoy the game in the traditional, offline way. Go ahead and take a look at these, maybe you will end up finding the next addictive Gaming title right below!

And, in the meanwhile, you can also take a look at this post to check out the main Android apps across all kinds of popular Board Games prevalent these days. 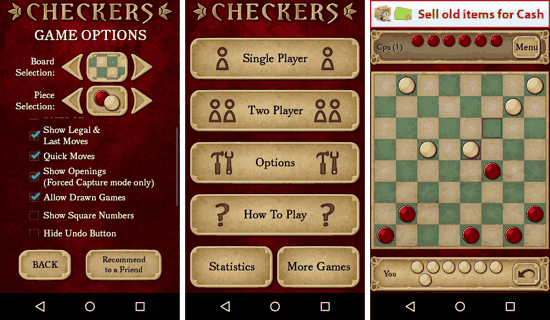 Checkers Free is one of the best free Checkers Game Apps for Android. The interface of the app is extremely intuitive and has animations all around. You can either play it in Single Player Mode, or choose to play it with your friend via the Two-Player option. Do note that you only have an offline 2-Player option in this game. The graphics in this game are simple, yet eye-pleasing at the same time. And yeah, you can also customize the look of the pieces and the Board by going to the in-game options. Checkers Free can be installed from the Google Play Store. 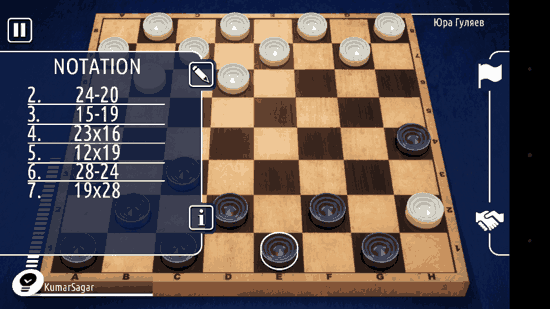 Draughts for Android is another feature-rich app which lets you Play Checkers the way you want it — whether it be offline Single Player, or an Online Multiplayer. The MultiPlayer interface is pretty intuitive as well since it lets you take a look at the current score via the Notation menu. Oh, and you can connect your Facebook and Google Play Games account as well, and see the high scores within the app. In the Single Player option, you can choose between the International, Russian, and Brazilian game types, and choose the difficulty level as well. Go on to the Google Play Store and try this game out for yourself! Do note that the Play Store listing of the app has the name as Checkers online free draughts. 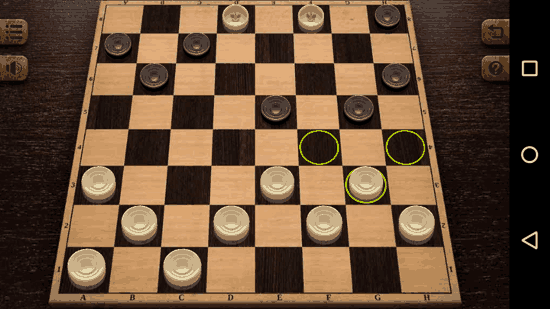 Checkers Elite is a classic Android game which lets you play Checkers in classic Fashion with graphics that try to stay as simple and close to the real deal as possible. You can choose to play the game in 2D mode, which will give you a view of the board from just above it, or choose the 3D mode which will give you a view similar to the screenshot shown above. The commonly seen tap to move controls are present here as well. You can Play the Single or Two Player Offline game, or even opt for Online Multiplayer to search for an online opponent! You can also choose the type of Checkers that you would like to Play like English Draughts, Russian, Brazilian, etc. Some of the game types are paid, but there are enough options available for free as well. 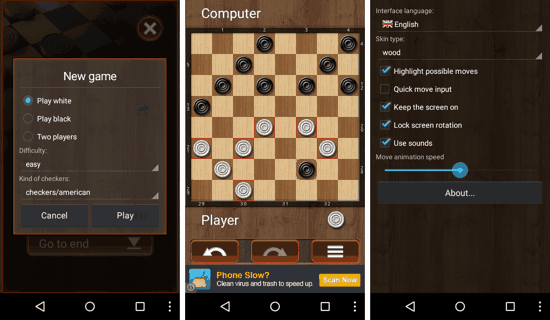 All-In-One Checker is another great option if you would like to try out free Checkers games from all over the world. All-In-One Checker lets you play a total of 30 types of Checkers from different regions around the world. All you need to do, is tap on the drop-down menu on the screen when selecting a New Game. Then select whichever type of Checkers you would like to play, and then tap on Play. Other than this, the app is fairly simple, and has no online or multi-player options whatsoever. Go ahead and get All-In-One Checker from the Google Play Store for free! 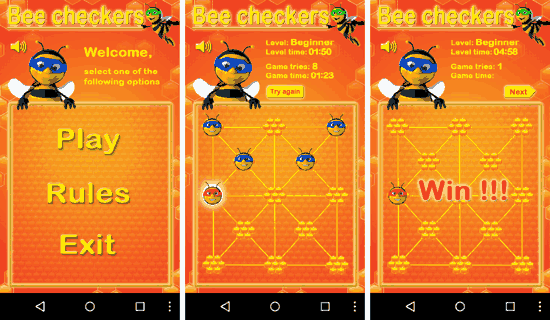 Bee Checkers for Android is a simple Free Checkers Game in terms of concept, but posts a decent challenge in execution! The game is basically based on Bees, whom you have to move around on the Checkers  board. All you got to do is move the bees like Checkers pieces, that is, diagonally over the other pieces (you know the drill!), so that not a single piece is left on the board. The condition here is that you won’t be able to continue if you play one wrong move! Go on and give it a try, the Game tutorial will take you through the rules, the first time that you launch it! Bee Checkers is a freely available game over at the Google Play Store.

And this list of 5 Best Free Checkers Game Apps for Android hereby ends. Any other Free Checkers Game apps you think I should have mentioned? Scroll a bit more, and start typing on your keyboard just when you click on the comments section below. Why? To share your thoughts of course!