Windows Medkit is a free and portable software to repair Windows which you can use in order to correct system errors which are usually left after you remove a virus infection. Those who have been having problems with viruses might find that they can’t access certain settings configuration in Windows, like for example Startup and Tasks. With Windows Medkit you can fix those problems.

Interface of this free system repair utility can be seen in the image above. As you can see, it’s not much to look at, but behind those menus at the top a lot of interesting tools and tweaks are hidden which should fix your system after you’ve had your Windows invaded with viruses.

Virus attacks will in a lot of situations leave your system pretty much unusable, leaving important system options like the Shutdown dialog inaccessible so you can’t even turn off your computer. On the other hand, we have situations where computer shuts down on its own, this is also something with which Windows Medkit can help you out. Here, are few tips to help you get started faster.

How to Repair Windows Settings and Options After and During Virus Infections with Window Medkit?

Some will say that the best thing to do once that your computer picks up a nasty virus infection would be to reinstall Windows, but in a lot of situations that won’t be possible. If you would like to restore functionality of your system, to restore for example the Folder Options entry from the My Computer menu, when you have the main window of Windows Medkit click on Windows Medkit >> Fixes. 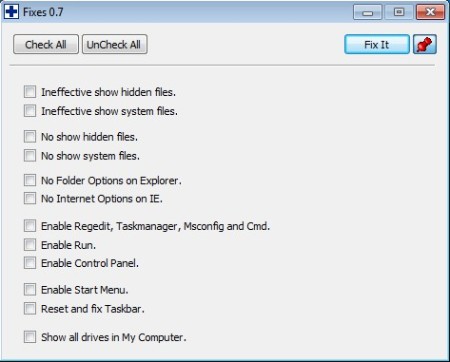 Dozens of different system settings can be repaired and fixed, you just need to put checkmarks next to the options that you want to fix, like for example Regedit, Taskmanager, and the aforementioned Folder Options menu, and after that you need to click on Fix It. This will tweak the Windows settings and restore the old functionality. 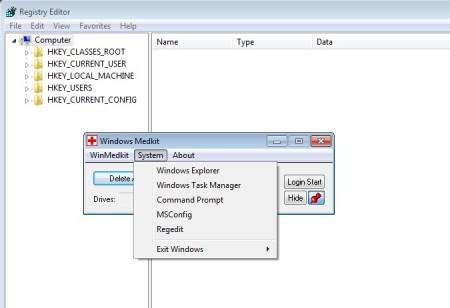 If you only want to use the quick access feature where you can open up directly tools like Msconfig, Windows Explorer, and many others, you’re gonna have to click on the System from the top menu and select the desired option from there. You can set this free virus attack system repair utility to run with Windows at login.

Windows Medkit is a very useful tool which can be used by tech support on computers which were plagued with viruses. Functionality can be restored quickly. Try it out and see how useful Windows Medkit can be.

Try out NirLauncher, Cloud System Booster, and Argente Utilities reviewed by us.