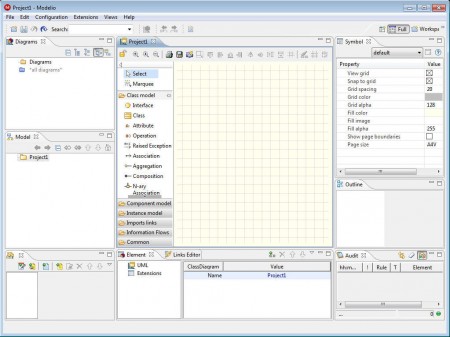 Check out some similar software reviewed by us like: KangaModeling, Diagram Ring, and Timing Editor.

The image above shows you the default interface of this free modeling software. Interface is divided up into several different segments which should help you create models more efficiently. In the center of the screen we have the main work area and next to it there are various elements which you can use to create models and diagrams. All around this central area there’s all kinds of smaller windows where settings for the elements used in the models can be changed.

Modelio is an open source application, created for the Linux desktop environment, but it was also ported to Windows. It’s also available for both 64bit and 32bit systems. Using this free modeling software might be a bit frightening at first, but it’s not very difficult and you can create models and diagrams very quickly. Here are a few pointers to guide you into the right direction.

How to Create Models and Diagrams with Modelio:

First thing which you should do is to get acquainted with the list of available elements which you can use in your models. There’s a total of 6 different groups of elements and each one of them has a different use. 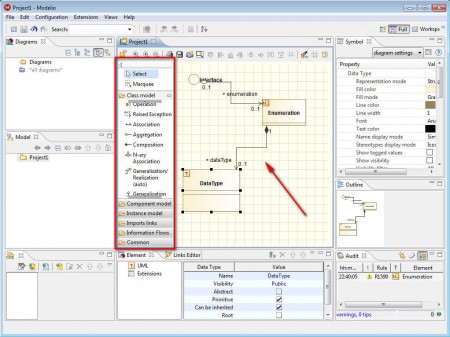 For creating the type of design that you can see in the image above all that you need to have open is the Class model list of elements and while you’re there start drawing the layout by creating an Interface. This would be the start point of the diagram that you are modeling with the help of Modelio. Go through all the elements to see what kind of elements are offered, so that you know them when you’re creating your own models. 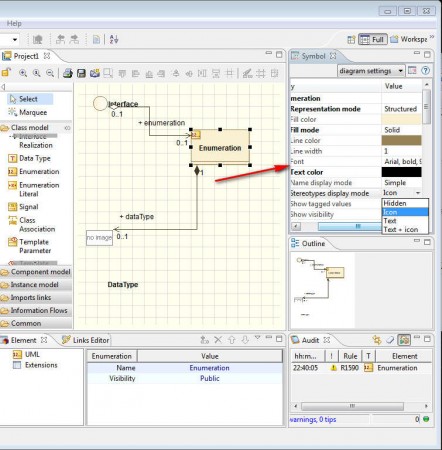 Each one of the elements from the list that Modelio has, can be easily edited. On the image above we are changing the appearance of the box, other values can also be changed, for example type of the box, what it represents in the created model and so on.

UML diagrams are a relatively new thing in the world of business and organization but they are already very widespread. With the help of Modelia, you can easily draw various different diagrams and models for everything that you can think of. Every process like for example software development, everything can be displayed with the help of models that Modelia can create, so why not give it a try to see how it can help you out. There’s no installation, standalone application, just run the main executable. Works on Windows and Linux. Download and try it free.