Image Duplicates Search Tool is a free duplicate image finder for Windows. It features duplicate image search which uses color histograms in order to narrow down on duplicate photos from your image collection. The only thing that you need to do is select the folders where images are located and hit the Search button. Duplicate images are gonna be found quickly. Next to duplicate photos, you also get a list of similar photos, with ratings on how similar they are to each other.

This is a rather simplistic similar image scanner, which can be seen from the screenshot above. Everything that you need to find duplicate photos is located in the top left corner menu. Library option opens up the file selection dialog, instead of the File option, which surprisingly only holds the About and Exit shortcuts. You can open individual images, folders (including subdirectories), or libraries which you’ve exported previously, XML format is used.

Color histogram is basically a finger print that every image has, similar to MD5 hashes and files. It represents the distribution of colors on an image. Read more about color histogram over here. Image Duplicates Search Tool checks the color histogram of every photo and compares photos that you’ve selected. This way it can detect not only duplicate photos, those that are completely identical, but also similar photos. Here’s a few pointers to help you get started. 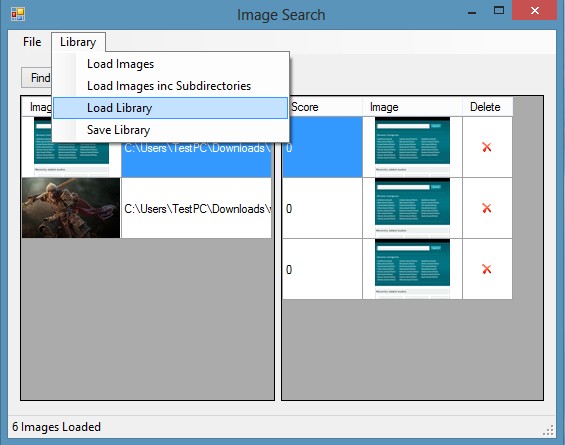 Find Duplicates start the image comparison. How long it will take this free duplicate image finder to go through all the photos depends on how many you’ve selected. After the scan finishes, every photo that has a duplicate or a similar one to it exist will be shown in the list on the left. Clicking on an image from the list on the left shows you a list of potential candidate on the right. Notice the score column, that’s the similarity index. If that number is 0, image is identical, if it’s something other than 0, it’s not similar, but not quite the same.

Image Duplicates Search Tool does everything as advertised. Images are cross referenced quickly and you’re displayed with results about identical and similar photos. Setup is easy, just a few steps and you’re done. If you’re looking for a free duplicate image finder, this is the app for you.